Equity in Global Food Systems Change: A Cross-Country Analysis of the Drivers of Food Insecurity 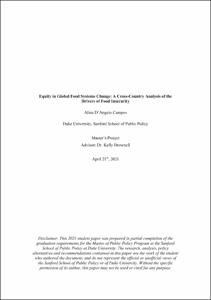 View / Download
337.1 Kb
Date
Author
D'Angelo Campos, Aline
Advisor
Brownell, Kelly
Repository Usage Stats
146
views
113
downloads
Abstract
Since the middle of the 20th century, policy makers have prioritized high agricultural productivity to maximize the production of a handful of staple crops used in the production of ultraprocessed foods and animal products. As a result, our food system produces large externalities for public health and the environment that are not currently priced in the market. Among many calls for change to this mode of production, there are also valid concerns about the impacts of such change on food security. This study sought to contribute to the debate around this topic by analyzing the relationship between food prices and food insecurity at the country level. Through multiple regression analysis, we find that higher food prices are associated with larger increases in food insecurity rates in lower-income settings than in higher-income settings. We also find that several others factors, such as GDP per capita, poverty rate, portion of rural population, and portion of population under 15 years old are significantly associated with food insecurity. These results suggest that focusing policy efforts on non-price related drivers of food insecurity may be effective in combating it, especially in higher-income settings – while offering the important added benefit of minimizing public-health and environmental damage.
Type
Master's project
Department
The Sanford School of Public Policy
Subject
food security
FIES
food prices
food equity
food policy
food systems
sustainability
CPI
Big Mac Index
Permalink
https://hdl.handle.net/10161/22756
Citation
D'Angelo Campos, Aline (2021). Equity in Global Food Systems Change: A Cross-Country Analysis of the Drivers of Food Insecurity. Master's project, Duke University. Retrieved from https://hdl.handle.net/10161/22756.
Collections
More Info
Show full item record