Citizen Canine: Humans and Animals in Athens and America 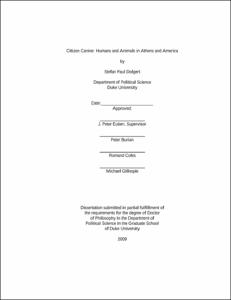 "Citizen Canine" explores the sacrificial underpinnings of politics via a critique of the boundary between human and animal in Homer, Aeschylus, and Plato. I argue that the concept "animal" serves a functional rather than descriptive role: it is born of a sacrificial worldview that sees violence as a necessary foundation for human life, and which therefore tries to localize and contain this violence as much as possible through a system of sacrifice. I begin the dissertation with Martha Nussbaum's recent work on the "frontiers of justice," but argue that she is insufficiently attentive to the roles that animality and the rhetoric of sacrifice play in her discourse. I then examine the concept of sacrifice more thematically - using Jacques Derrida and Rene Girard among others - which justifies the move back to the Greeks to understand the specific manner in which sacrifice, human, and animal are intertwined at a crucial moment in Western history. In the Greeks we see an inception of this sacrificial concept of the political, and the movement from Homer to Aeschylus to Plato presents us with three successive attempts to understand and control cosmic violence through a sacrificial order. I contend that a similar logic continues to inform the exclusions (native/foreigner, masculine/feminine, human/nature) that mark the borders of the contemporary political community - hence my dissertation is directed both at the specific animal/human dichotomy as well as the larger question of how political identity is generated by the production, sacrifice and exclusion of marginalized communities.