Essays on Macroeconomics in the Frequency Domain 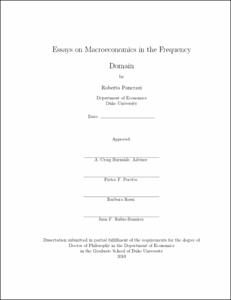 This dissertation consists of three essays on macroeconomics in the frequency domain. In the first essay, I show that whereas the High-Frequency volatility of the majority of the macroeconomic series declined after the early 1980s, their Medium-Frequency volatility did not. Moreover, the Medium-Frequencies capture a large fraction of the volatility of these variables. In order to formally test whether a set of time-series is characterized by a break in their variance at any frequency, I construct a frequency domain structural break test. After deriving its asymptotic and small sample properties, I apply the test to the main U.S. real macroeconomic variables and conclude that the Great Moderation is just a High-Frequency phenomenon.

The third essay, which is joint work with Marija Vukotic, evaluates the effects of a change in monetary policy on the decline of the volatility of real macroeconomic variables, and on its redistribution from high to medium frequencies during the post-1983 period. By using a dynamic stochastic general equilibrium (DSGE hereafter) model, we find that the

spectral density of output, investment, and consumption. However, when we also consider a change in the exogenous processes, a different monetary policy accounts for 40 percent of the decline in the high-frequency volatilities and partially accounts for the redistribution of the variance toward lower frequencies.