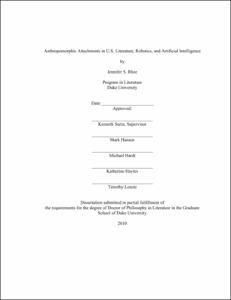 "Anthropomorphic Attachments" undertakes an examination of the human as a highly nebulous, fluid, multiple, and often contradictory concept, one that cannot be approached directly or in isolation, but only in its constitutive relationality with the world. Rather than trying to find a way outside of the dualism between human and not-human, I take up the concept of anthropomorphization as a way to hypersaturate the question of the human. Within this hypersaturated field of inquiry, I focus on the specific anthropomorphic relationalities between human and humanoid technology. Focusing primarily on contemporary U.S. technologies and cultural forms, my dissertation looks at artificial intelligence and robotics in conversation with their cultural imaginaries in contemporary literature, science fiction, film, performance art, and video games, and in conversation with contemporary philosophies of the human, the posthuman, and technology. In reading these discourses as shaping, informing, and amplifying each other and the multiple conceptions of the human they articulate, "Anthropomorphic Attachments" attends to these multiple humans and the multiple morphologies by which anthropomorphic relationalities imagine and inscribe both humanoid technologies and the human itself.