Regulation of Mitochondrial Dynamics during Apoptosis and the Cell Cycle 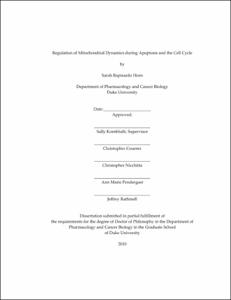 Homeostatic maintenance of cellular mitochondria requires a dynamic balance between fission and fusion, and disruptions in this balance have been implicated in multiple pathological conditions, including Charcot-Marie-Tooth, Parkinson's, and Alzheimer's diseases. Whereas deregulated fission and fusion can be detrimental to health and survival, controlled changes in morphology are important for processes like cellular division and apoptosis. Specifically, regulated mitochondrial fission occurs closely with cytochrome c release during apoptosis and upon entry into mitosis during the cell cycle. Using cell culture-based assays, microscopy, and fly genetics, we examine how changes in the mitochondrial network are mediated at the molecular level during apoptosis and the cell cycle.

Secondly, we characterize Drp1 degradation by the APC/C during mitotic exit and interphase. We provide evidence that APC/CCdh1-mediated degradation of Drp1 underlies both the morphological changes that occur during progression through the cell cycle and changes in mitochondrial metabolism during interphase. Inhibition of Cdh1-mediated Drp1 ubiquitylation and proteasomal degradation during interphase prevents the normal regrowth of mitochondrial networks after mitosis, prevents cyclin E accumulation, and alters the profile of lipid-derived metabolites. Our findings describe a novel role for APC/CCdh1-mediated Drp1 degradation in cell cycle-dependent changes in mitochondrial morphology and metabolic function and suggest that the APC/CCdh1complex may regulate the distinct bioenergetic needs of a growing cell during synthetic phases of the cell cycle.