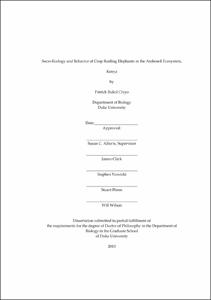 We therefore conducted a study on crop raiding behavior (a risky foraging strategy) in African elephants from the greater Amboseli ecosystem, in southern Kenya. We specifically examined the population sizes, gender and patterns of raiding elephants and investigated the effect of crop-raiding and genetic heterozygosity on male body size. We also examined the influence of age and genetic relatedness on observed patterns of association. Finally, we examined the role of life history milestones, association patterns and social structure on the acquisition of crop raiding behavior among wild free ranging male African elephants. With regard to the influence of association patterns on crop raiding behavior, we were specifically interested in understanding the mechanisms by which social learning might occur among male elephants.

Our results showed that 241elephants from different populations in the ecosystem converged to raid farms. Approximately 35% of raiders were from Amboseli National Park, and the rest were other populations in the ecosystem. We observed only post-pubertal males but not females to raid. About one third of post-pubertal males from the Amboseli population were raiders. We found evidence of habitual raiding by some individuals. Crop raiding predicted post-pubertal male size, with raiders being larger than non-raiders. This result suggests that taking risks pays off for males. Our results also showed that other variables known to influence growth like genetic heterozygosity had no effect on size-for-age in male elephants, because low-heterozygosity males were rare. The probability that an individual male is a crop raider was greater for older individuals than young males. The probability that a male is a raider was greater when his two closest associates were raiders versus when they were not raiders and when a male's second closest associate was older, versus when his second closest associate was of similar age or younger. These results suggest that increasing energetic demands associated with life history milestones and social learning play a significant role in the initiation of crop raiding behavior. Raiders did not cluster into separate social units from non-raiders, probably due to the nature of social learning exhibited by this species and due to the diffuse nature of male elephant social units.