Genetic Modifiers in Response to Ischemia 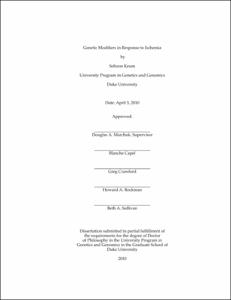 In a mouse model of ischemic stroke, infarct volume is highly variable and strain dependent, but the natural genetic determinants responsible for this difference remain unknown. To identify genetic determinants regulating ischemic neuronal damage and to dissect apart the role of individual genes and physiological mechanisms in infarction in mice, we performed forward genetic mapping analyses of surgically induced cerebral infarct volume. We have identified multiple quantitative trait loci (QTL) that modulate infarct volume, with a major locus (<italic>Civq1 </italic>) on chromosome 7 accounting for over 50% of the variation, with a combined LOD score of 21.7. Measurement of infarct volume in chromosome substitution strains (CSS) and two additional intercrosses validate that <italic>Civq1</italic> on chromosome 7 is present in multiple inbred strains. Interval-specific ancestral SNP haplotype analysis for <italic>Civq1</italic> results in 5 candidate genes. A causative gene underlying <italic>Civq1</italic> may regulate collateral artery formation and genetic variations in the gene may result in the differential outcome of cerebral infarction. Additionally, we have identified a locus of large effect, <italic>Civq4</italic>, modulating infarct volume through a mechanism different from collateral circulation. In conclusion, the extent of ischemic tissue damage after distal middle cerebral artery occlusion (MCAO) in inbred strains of mice is regulated by genetic variation mapping to at least 4 different loci. A single locus on chromosome 7 determines the majority of the observed variation in the trait in multiple mouse strains. <italic>Civq1</italic> appears to be identical to <italic>Lsq1</italic>, a locus conferring limb salvage and reperfusion in hindlimb ischemia. The identification of the genes underlying these loci may uncover novel genetic and physiological pathways that modulate cerebral infarction and provide new targets for therapeutic intervention in ischemic stroke, and possibly other human vascular occlusive diseases.