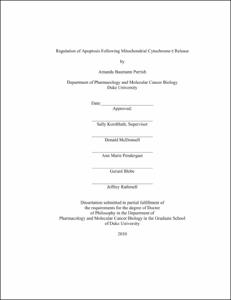 Many pro-apoptotic signals trigger mitochondrial cytochrome c release, leading to caspase activation and ultimate cellular breakdown. Cell survival pathways, including the mitogen-activated protein kinase (MAPK) cascade, promote cell viability both by impeding mitochondrial cytochrome c release and by inhibiting subsequent activation of caspases. Cytosolic cytochrome c is directly responsible for initiating formation of the caspase-activating apoptosome, which, in many cell types, plays a crucial role in the apoptotic process. Given the important role of cytochrome c in dismantling the dying cell, we wanted to investigate the process of cytochrome c-induced apoptosis with the goal of understanding how this mechanism is altered in certain malignant conditions.

First, we examined cytochrome c-induced caspase activation in normal and tumorigenic mammary epithelial cells. Although most tumor types have developed mechanisms for evading apoptosis, we surprisingly discovered that breast cancer cells were hypersensitive to cytochrome c when compared with their normal counterpart. Specifically, breast cancer cells show increased binding of caspase-9 to the Apaf-1 caspase recruitment domain. This altered apoptosome formation is mediated by overexpression of the protein PHAPI in the malignant mammary epithelial cells. Immunoblot analysis demonstrated that protein levels of PHAPI are also elevated in human breast tumors. These results suggest a novel paradigm where breast cancer cells are refractory to cytochrome c release in response to certain stimuli, but they are quite sensitive to apoptosis downstream of the mitochondria.