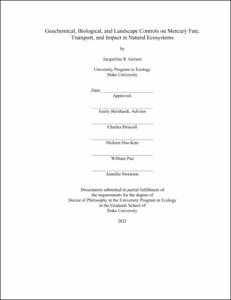 An increasingly large fraction of Earth’s surface has been reshaped and contaminated by humans, leading experts to suggest we’ve entered into a new geologic epoch – the Anthropocene. Nowhere are these changes more obvious than in mining-impacted landscapes. Mining reshapes landscapes, liberates trace elements, and alters the fate, transport, and transformation of trace elements. In this dissertation, I examine the extent to which mining both alters landscape features and mobilizes trace elements, and how these paired changes together determine the bioavailability of toxic trace elements. Specifically, in this dissertation, I focus on the mobilization and transformation of selenium (Se) and mercury (Hg) from mountaintop mining (MTM) in West Virginia; the biogeochemical interactions between Se and Hg in ecosystems and organisms; and the fate of Hg derived from artisanal and small-scale gold mining (ASGM) in Senegal and Peru.

In chapter 2, I examine the fate of Hg and Se from MTM of coal. Coal is naturally enriched in trace elements, including Hg and Se. Alkaline mine drainage from MTM – the dominant form of surface coal mining in Appalachia, USA – releases large quantities of Se into streams draining mined catchments, resulting in elevated bioaccumulation of Se in aquatic and riparian organisms. Yet, the release of Hg into these streams from MTM has not yet been studied. I measured total Hg, methyl Hg (MeHg), and Se in stream water, sediment, biofilm, cranefly larvae, and riparian spiders in alkaline streams (pH range: 6.9-8.4) across a mining gradient (0-98% watershed mined) in central Appalachia. Hg concentrations ranged from below detection limit (BDL)-6.9 ng/L in unfiltered water, BDL-0.05 μg/g in bulk sediment, 0.016-0.098 μg/g in biofilm, 0.038-0.11 μg/g in cranefly larvae, and 0.046-0.25 μg/g in riparian spiders. In contrast to Se, I found that Hg concentrations in all environmental compartments were not related to the proportion of the watershed mined, suggesting that Hg is not being released from, nor bioaccumulating within, MTM-VF watersheds. I also did not find clear evidence for a reduction in Hg methylation or bioaccumulation under elevated Se concentrations: water, sediment, biofilm, and riparian spiders exhibited no relationship between Hg and Se; only cranefly larvae exhibited a negative relationship (p=0.0002, r2=0.42). I suggest that the type of surface mining matrix rock, with resultant alkaline or acid mine drainage, is important for the speciation, mobility, and bioaccumulation of trace elements within watersheds affected by mining activities.

In chapter 3, I examine evidence for an interaction between Hg and Se. Hg is a pervasive environmental pollutant and contaminant of concern for both people and wildlife that has been a focus of environmental remediation efforts for decades. A growing body of literature has motivated calls for revising Hg consumption advisories to co-consider Se levels in seafood and implies that remediating aquatic ecosystems with ecosystem-scale Se additions could be a robust solution to Hg contamination. Provided that elevated Se concentrations are also known toxicological threats to aquatic animals, I performed a literature search to evaluate the strength of evidence supporting three assertions underpinning the ameliorating benefits of Se: (1) dietary Se reduces MeHg toxicity in consumers; (2) environmental Se reduces Hg bioaccumulation and biomagnification in aquatic food webs; and (3) Se inhibits Hg bioavailability to, and/or MeHg production by, microbial communities. Limited or ambiguous support for each criterion indicates that many scientific uncertainties and gaps remain regarding Se mediation of Hg behavior and toxicity in abiotic and biotic compartments. Significantly more information is needed to provide a strong scientific basis for modifying current fish consumption advisories on the basis of Se:Hg ratios or for applying Se amendments to remediate Hg-contaminated ecosystems.

In chapter 4, I examine evidence for Hg and Se interaction at the base of the food web. Hg, a potent neurotoxin, can biomagnify through food webs once converted into MeHg. Some studies have found that Se exposure may reduce MeHg bioaccumulation and toxicity, though this pattern is not universal. Se itself can also be toxic at elevated levels. We experimentally manipulated the relative concentrations of dietary MeHg and Se (as selenomethionine [SeMet]) for an aquatic grazer (the mayfly, Neocloeon triangulifer) and its food source (diatoms). Under low MeHg treatment (0.2 ng/L), diatoms exhibited a quadratic pattern, with decreasing diatom MeHg concentration up to 2.0 g Se/L and increasing MeHg accumulation at higher SeMet concentrations. Under high MeHg treatment (2 ng/L), SeMet concentrations had no effect on diatom MeHg concentrations. Mayfly MeHg concentrations and biomagnification factors (concentration of MeHg in mayflies: concentration of MeHg in diatoms) declined with SeMet addition only in the high MeHg treatment. Mayfly biomagnification factors decreased from 5.3 to 3.3 in the high MeHg treatment, while the biomagnification factor was constant with an average of 4.9 in the low MeHg treatment. The benefit of reduced MeHg biomagnification was offset by non-lethal effects and high mortality associated with ‘protective’ levels of SeMet exposure. Mayfly larvae escape behavior (i.e., startle response) was greatly reduced at early exposure days. Larvae took nearly twice as long for all to metamorphose to adults at high Se concentrations. The minimum number of days to emergence did not differ by SeMet exposure, with an average of 13 days. We measured an LC50SeMet for mayflies of 3.9 μg Se/L, with complete mortality at concentrations ≥6.0 μg Se/L. High reproductive mortality occurred at elevated SeMet exposures, with only 0-18% emergence at ≥4.12 g Se/L. Collectively our results suggest that while there is some evidence that Se can reduce MeHg accumulation at the base of the food web at specific exposure levels of SeMet and MeHg, Se is also toxic to mayflies and could lead to negative effects that extend across ecosystem boundaries.

In chapter 5, I examine the fate of total and MeHg from ASGM in Senegal. The largest source of global Hg anthropogenic inputs to the environment is derived from ASGM activities in developing countries. While our understanding of global Hg emissions from ASGM is growing, there is limited empirical documentation about the levels of total Hg (THg) and MeHg contamination near ASGM sites. I measured THg and MeHg concentrations in soil (n=119) sediment (n=22), and water (n=25) from four ASGM villages and one non-ASGM reference village in Senegal, West Africa with active ASGM. Nearly all samples had THg and MeHg concentrations that exceeded the reference village concentrations and USEPA regulatory standards. The highest median THg concentrations were found in huts where Hg-gold amalgams were burned (7.5 μg/g), while the highest median MeHg concentrations and percent Hg as MeHg were found in river sediments (4.2 ng/g, 0.41%). Median river water concentrations of THg and MeHg were also elevated compared to values at the reference site (22 ng THg/L, 0.037 ng MeHg/L in ASGM sites). This study provides direct evidence that Hg from ASGM is entering both the terrestrial and aquatic ecosystems where it is converted to the neurotoxic and bioavailable form of MeHg in soils, sediment, and water.

In chapter 6, I examine pathways of Hg deposition and storage from ASGM in the Peruvian Amazon. Hg emissions from ASGM now exceed coal combustion as the largest global source of Hg to the atmosphere and are being released into some of the most biodiverse ecosystems on Earth. Hg, following microbial conversion to MeHg, is a potent neurotoxin with deleterious impacts on people and wildlife. However, while we know ASGM is an important source of Hg to the atmosphere, we know very little about the fate of this source of Hg. Here, I examine Hg deposition and storage in the Peruvian Amazon by analyzing THg and MeHg in atmospheric, precipitation, leaf, and soil samples from remote and mining-impacted areas. I found that intact forests in the Peruvian Amazon near ASGM receive extremely high inputs of Hg in throughfall (71 µg m-2 yr-1) and litterfall (66 μg m-2 yr-1) and have accumulated significant quantities of soil Hg (9100 μg Hg m-2 within the top five cm). My findings show for the first time that intact forests near ASGM are intercepting high levels of Hg deposition, and that songbirds inhabiting these forests have elevated levels of mercury. Our findings raise important questions about how mercury pollution may constrain modern and future conservation efforts in these ecosystems.

In chapter 7, I examine the combined effects of landscape change and Hg loading from ASGM in the Peruvian Amazon. ASGM is the largest global source of anthropogenic Hg emissions. However, little is known about how effectively Hg released from ASGM is converted into the bioavailable form of MeHg in ASGM-altered landscapes. Through examination of ASGM-impacted river basins in Peru, I show that lake area in heavily mined watersheds has increased by 670% between 1985 and 2018, and that lakes in this area convert Hg into MeHg at net rates 5-7 times greater than rivers. These results suggest that synergistic increases in lake area and Hg loading associated with ASGM are significantly increasing exposure risk for people and wildlife. Similarly dramatic increases in lake area in other ASGM hotspots suggest that ‘hydroscape’ (hydrological landscape) alteration is an important and previously unrecognized component of Hg risk from ASGM.

In chapter 8, I develop several of the emergent themes that connect the distinct elements of this dissertation research. Here I develop a conceptual framework for merging perspectives from geochemistry, landscape ecology, and toxicology to understand the movement, fate and impact of toxic trace elements in the natural world. In the Anthropocene, we typically study the increasing mobilization of toxic trace elements and the changing land cover of our planet as separate issues. Yet the way we alter our landscapes plays a critical role in the likelihood that any particular place will retain, sequester, and alter the transport and bioavailability of trace elements to people and wildlife. The goal of this chapter is to provide examples that demonstrate that the risk of contaminant exposure is not merely a function of loading, but arises through interactions among loading, landscape capture, and biological transformation, all of which are simultaneously altered by human activities. I posit that successful prevention and mitigation of trace element toxicity requires a merging of these diverse perspectives and traditions.