Blessed: A History of the American Prosperity Gospel 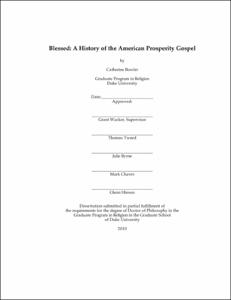 This dissertation introduces readers to the major figures and features of the twentieth-century American prosperity gospel. It argues that these diverse expressions of Christian faith-fuelled abundance can be understood as a movement, for they stem from a cohesive set of shared understandings. First, the movement centered on Faith. It conceived of faith as an "activator," a power given to believers that bound and loosed spiritual forces and turned the spoken word into reality. Second and third respectively, the movement depicted faith as palpably demonstrated in wealth and health. It could be measured in both in the wallet--one's personal wealth--and in the body--one's personal health--making material reality the measure of the success of immaterial faith. Last, the movement expected faith to be marked by victory. Believers trusted that culture held no political, social, or economic impediment to faith, and no circumstance could stop believers from living in total victory here on earth. Though its origins lay in the late nineteenth century, the prosperity gospel took root in the Pentecostal revivals of the post-World War II years. It reached maturity by the late 1970s as a robust pan-denominational movement, garnering a national platform and a robust network of churches, ministries, publications, and media outlets. Using the tools of ethnography and cultural history, this dissertation argues that faith, wealth, health, and victory served as the hallmarks of this American phenomenon.