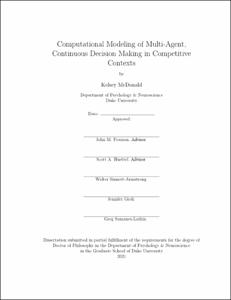 Humans are able to make adaptive decisions with the goal of obtaining a goal, earning a reward, or avoiding punishment. While much is known about the behavior and corresponding underlying neural mechanism relating to this aspect of decision-making, the field of cognitive neuroscience has focused almost exclusively on how these types of decisions are made in discrete choices where the set of possible actions is comparatively much smaller. We know much less about how human brains are able to make similar types of goal-directed decisions in continuous contexts which are more akin to the types of choices humans make in real-life. Further, how these processes are modified by the presence of other humans whose goals might influence one's own future behavior is currently unknown. Across three empirical studies, I address some of these gaps in the literature by studying human competitive decision-making in a dynamic, control paradigm in which humans interacted with both social and non-social opponents (Chapter 2 and Chapter 4). In Chapter 3, I show that brain regions heavily implicated in social cognition and value-based decision-making also play a role in tracking continuous decision metrics involved in monitoring instantaneous coupling between opponents, advantageous decision timing, and constructing social context. Collectively, the results in this dissertation demonstrate the utility in studying decision-making in less-constrained paradigms with the overall goal of gaining further understanding of how humans make complex, goal-directed decisions closer to real-world conditions.