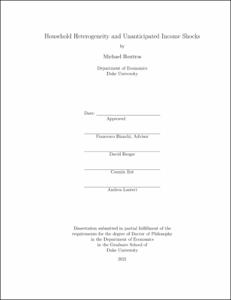 In this dissertation, I study how individual households respond to unanticipated changes in income. I focus on two recent fiscal programs, the Economic Stimulus Act (ESA) of 2008 and the Coronavirus Aid, Relief, and Economic Security (CARES) Act of 2020.

In the first chapter, I study the ESA. I demonstrate when Economic Stimulus Payments were being distributed to households, the macroeconomic environment was characterized by three main facts: (1) household income had yet to fall, (2) households were anticipating worsening economic conditions, and (3) consumer credit markets were already tightening. I modify the standard Permanent Income Hypothesis consumption-saving model to incorporate these three facts and assess the model's prediction for the household response to unanticipated income in the form of Economic Stimulus Payments. This modified model predicts that borrowing constrained households that receive the stimulus wish to increase consumption, but are forced to deleverage. Depending on the degree of indebtedness, size of the stimulus and recession, and size of the credit crunch, households may either increase or decrease consumption. Using micro-level household data from the Survey of Income and Program Participation, I find that consistent with the Permanent Income Hypothesis model, changes in behavior are most sensitive for households near their borrowing constraint. The empirical results suggest that constrained households used most of the stimulus to deleverage, but also increased spending. The more indebted is a household, the more likely it is to use the stimulus to repay debt, and the less likely it is to increase consumption or savings. This is inconsistent with the standard model but is consistent with the model incorporating the full macroeconomic environment in 2008.

In the second chapter, I study the CARES Act. As part of the Act, the IRS distributed $300 billion in Economic Impact Payments (EIPs) directly to US households. In the Census Bureau's Household Pulse Survey, almost 75% of households receiving an EIP reported using it to mostly pay for expenses. Separating respondents based on labor income interruptions, 84% of unemployed households reported mostly spending their EIPs, compared to 63% of employed households. I contribute to studying the trade-off between the timeliness and specificity of government transfer programs. Since the consumption responses for employed and unemployed households are similar, I conclude that a more targeted program at the expense of timeliness may not have have had a larger aggregate spending response. I find larger differences between households sorted on income, regardless of employment status, suggesting that income may be the more important determinant of EIP usage. Overall, I conclude that Economic Impact Payments played an important role in stabilizing aggregate spending.

In the final chapter, I build and estimate a quantitative model that generates a distribution of consumption responses similar to those observed in the data. I build and estimate a quantitative model of bounded rationality consistent with two motivating facts. First, highly liquid households have large consumption responses out of income shocks that cannot be driven by borrowing constraints. Second, larger income shocks induce smaller consumption responses and more intertemporal smoothing. In the model, a household responds to an income shock by reoptimizing over a planning horizon chosen to trade off benefits of consumption smoothing against cognitive planning costs. The optimal planning horizon is increasing in income, wealth, and the magnitude of the income shock. Estimated using the Economic Stimulus Act of 2008, the model implies that fiscal policies targeting more households with smaller payments induce less intertemporal smoothing and have the largest aggregate spending impact.