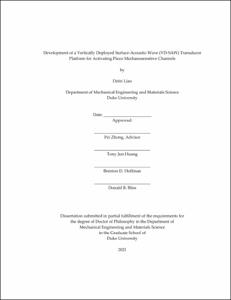 Ultrasound (US) neuromodulation has the unique advantage to noninvasively manipulate neural activity in deep brain with high spatial resolution and flexibility in beam steering. In recent years, there is a growing interest in producing accurate and cell-type specific US neuromodulation using sonogenetics, in which the targeted cells/neurons are genetically modified via overexpression of mechanosensitive (MS) ion channels that can be activated by US. This emerging technique has spurred extensive research activities with the hope for potential clinical treatment of neurological disorders, such as Parkinson’s disease, epilepsy and depression. It has been proposed by mainstream journals that the neuromodulating effects of US are associated with changes in membrane potential due to US-induced cell/neuron membrane deformation and the activation of MS ion channels, in which the latter mechanism is given greater prominence in sonogenetics. In this process, US exerts its mechanical effects in different forms including acoustic radiation force (ARF, associated with momentum transfer from the US wave field to the medium), acoustic streaming (displacement of fluid), and cavitation (generation of bubbles within the tissue). Despite much efforts in the field, the physical mechanism by which US is converted into an effective energy form to elicit neuromodulation remains poorly understood, and there is little consensus about optimal US parameters required to evoke a sonogenetic response with minimal adverse effect. Understanding how US interacts with cell membrane with specific US parameters/configurations will be important to optimize this technology. A significant barrier to advancing the sonogenetics is the lack of technologies and experimental systems to capture and dissect the dynamic interaction of ultrasound with target cells and the resultant cell membrane deformation (or strain) and its correlation to MS channel dynamics at the single cell level. To resolve these technical challenges, we have developed a novel vertically deployed surface acoustic wave (VD-SAW) transducer platform that can be readily integrated with a fluorescence microscope for simultaneous observation and monitoring of the interaction of US waves with target cells, the mechanical strain and stress in cell membrane, and the resultant bioeffects at the single cell level. In Chapter 1, we introduced the background of US neuromodulation and sonogenetics, followed by a description of the major challenges in this field and the key questions we’re going to address in this dissertation. In Chapter 2, we investigated the activation of Piezo1, one of the few eukaryotic channels known to be responsible to US, by monitoring the intracellular calcium response. We observed that Piezo1 activation is highly determined by shear stress amplitude and pulse length (PL) of the stimulation. Under the same acoustic energy, we identified an optimal PL that leads to maximum cell deformation, and Piezo1 activation rate with minimal injury. Our results suggested the optimal PL is related to the viscoelastic response of cell membrane and the gating dynamics of Piezo1 which has not been considered in previous sonogenetics studies. In Chapter 3, we further constructed a 3D cell culture model in collagen hydrogel to better mimic the realistic cell culture condition. The hydrogel ruled out the involvement of acoustic streaming and thus facilitated the investigation of the role of ARF in sonogenetics which is a more practical form of US energy in vivo. The VD-SAW array integrated with 3D cell culture model was translated to a confocal fluorescence microscope for acquiring the initiation of intracellular calcium response and the cell membrane deformation in 3D. With the system upgrade, we found ARF is more efficient than acoustic streaming for activating Piezo1 channel. We also observed that the Piezo2, a homolog to Piezo1, requires higher power of US than Piezo1 for activation. Interestingly, we found Piezo2 is sensitive to membrane compression, while Piezo1 is sensitive to membrane tension. The observed differences of mechanical sensitivities and activating schemes between Piezo1 and Piezo2 were consistent with previous evidence in cell mechanotransduction studies using patch clamp. We further combined numerical modeling and 3D confocal imaging with digital volume correlation to analyze cell membrane stress under insonification. We established the relationship between US-induced mechanical effect and cellular bioeffects (Ca2+ signaling via MS channel activation) by a key parameter: the total strain energy, which take accounts of magnitude of stress, volume of cell under stress, and sonification time. Our results suggested that the stress distribution and total strain energy induced by US were strongly correlated to the directions of ARF. We’ve shown that the total strain energy could highly recapitulate the effectiveness of ARF on Piezo1 activation. Overall, we have developed a miniatured, highly compatible and controllable VD-SAW transducer for studying sonogenetics at the single cell level. Our preliminary results provide new insights into the mechanisms of ultrasonic activation of Piezo. By virtue of its dimensions, compatibility, and targetability, the VD-SAW transducer can be readily applied for studying the mechanisms and key parameters underlying the activation of other MS channels by US in various types of cell/neuron. We also expect that VD-SAW can be translated to ex vivo (e.g. brain slice) or in vivo application with the advancement of fabrication and proper compensation of the skull-induced US attenuation.