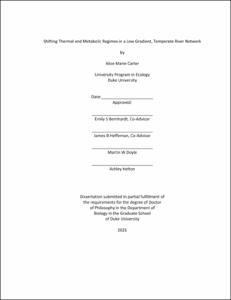 Rivers transform more than half of the organic inputs they receive from terrestrial systems through metabolic processes. In addition to providing the energetic base to sustain stream food webs, these transformations are linked to multiple elemental cycles and result in the release of greenhouse gasses to the atmosphere, oxygen depletion, and the mobilization of trace metals. Despite this central importance we lack a sufficient understanding of what drives processes within these ecosystems to make broad scale predictions about metabolic rates and biogeochemical cycles. This dissertation addresses how local controls interact with hydrologic and geomorphic constraints to determine the nature and magnitude of stream carbon and energy cycling. Through field observations and ecosystem process models, this study characterizes the spatial and seasonal biogeochemical dynamics of a single study system, New Hope Creek, a low gradient 3rd order river in the North Carolina Piedmont. I present a mechanistic explanation of stream ecosystem functioning from three different perspectives and use the insights gained to confront existing conceptual models and methods in river science. In chapter two, I examined the frequency and dynamics of river hypoxia, or depleted dissolved oxygen, in the North Carolina Piedmont by synthesizing state monitoring records since the 1960s and by collecting high resolution measurements of oxygen along a 20 km section of New Hope Creek. In chapter three, I monitored dissolved oxygen concentrations and modeled the metabolic regimes across six river segments over the course of three years. I compared the rates and seasonality of annual metabolism across space and time and examined the impact of climatic, hydrologic, and geomorphic drivers. Using the scales of this variation for context, I compared the metabolic regime in New Hope Creek today to a historical study of annual metabolism collected fifty years ago in the same site. In chapter four, I measured dissolved greenhouse gas concentrations from the autumn to the following spring at the six study locations from chapter three. I calculated the rate of exchange of CO2, CH4, N2O and O2 with the atmosphere, estimated the fraction of this flux that was attributable to instream metabolic processes, and determined the best predictors for each concentration and flux rate. The results from this research have implications for both conceptual models and methodological approaches. First, I found that hypoxia is widespread throughout New Hope Creek. It can arise through oxygen supply limitation due to seasonal low flows and warm water, even in the absence of high organic matter and nutrient loading. Hypoxia is most frequent at night and in pools, and is systematically underrepresented by state-wide monitoring records which rely on point samples and avoid both night and pools. Second, warmer water temperatures shift stream ecosystems toward more net heterotrophy. The effects of rising temperatures on stream ecosystem respiration are contingent upon organic matter inputs and storage, each of which are strongly constrained by flow regime and local geomorphology. Hydrologic settings in which storms are more frequent or more severe will drive high variability in the transport and fate of organic matter processing in streams. Third, the geomorphology and hydrology of New Hope Creek create conditions under which stream metabolic cycling is the dominant control on greenhouse gas concentrations and flux rates. These findings challenge preconceived notions about how rivers work and encourage us to reconsider conceptual models. Rivers are lotic ecosystems, which are defined by their advective flow, with the implication that they are well aerated and rarely hypoxic. Methods in stream ecology are not suited to study the conditions that arise during lentic, or non-flowing, time periods and as a result, the geomorphologies that create these conditions are avoided and understudied. However, these results suggest that they are control points of biogeochemical activity and that they may be more susceptible to change in response to anthropogenic drivers. Collectively, this study calls into question the binary distinction between lotic and lentic ecosystem dynamics with which we tend to categorize and study freshwater ecosystems. To understand the full range of variability of inland waters we must broaden our conceptual frameworks and adapt our methods of study to encompass ecosystems that span this divide.