The Rule of the Lash and the Rule of Law: Amelioration, Enslaved People's Politics and the Courts in Jamaica, 1780-1834 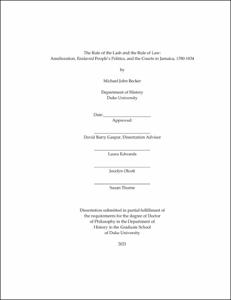 This dissertation examines amelioration – the effort to create a more “humane” or reformed version of slavery – as it intertwined with enslaved people’s everyday conflicts and the legal system of the Jamaican colonial state. In the context of a rising anti-slavery movement in metropolitan Britain, some pro-slavery advocates adopted colonial legal reform as a strategy to present slavery as redeemable and colonial governments as capable of restraining slaveholders’ worst impulses. While these reformers were often cynical in their aims, enslaved people took these proclaimed legal rights seriously and strategically mobilized their rhetoric to secure a semblance of justice and redress within – and without – the legal system. Whether through fighting in court for the return of their stolen possessions, or seeking justice for a friend brutally murdered by an overseer, enslaved people were savvy and calculated legal actors who stretched the modest reforms conceded by the state. Each dissertation chapter develops a thematic approach to a key area of the law of slavery– enslaved people’s flight, property ownership, maltreatment by enslavers, and criminal procedure – and examines enslaved peoples’ attempts to strategically mobilize reformist legal principles to secure rights and justice within the legal system. In the process, the centrality of the legal system to the maintenance of the broader edifice of white supremacy and plantocracy is also considered.