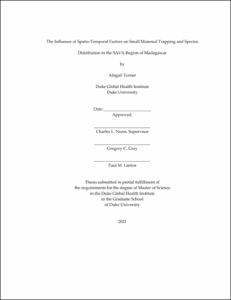 As deforestation occurs, the contact between humans and wildlife is expected to increase, resulting in increased risk of disease spillover to humans. Landscape modification and other spatio-temporal variables will influence population dynamics of small mammals, directly influencing the risk and transmission of zoonotic disease between species and humans. The study aimed to assess the influence of spatio-temporal variables on the trapping of small mammals across habitats of varying disturbance in the SAVA Region of Madagascar. Additionally, the study assessed the distribution patterns of small mammals within habitats, as well as the species diversity across habitats and throughout seasons. Endemic and invasive small mammals were trapped in 100m x 100m grids and two 100m pitfall lines over six consecutive days, in rice fields, sugar cane fields, vanilla fields, savoka, primary forest and secondary forest. The findings of the study suggest that heavily disturbed habitats are associated with capturing invasive species, exhibit low species diversity, and instances of aggregation during the ‘end of dry’ and ‘dry’ seasons. Considering the findings, highly disturbed habitats, like agricultural habitats, have a higher risk of disease than the risk in less disturbed habitats. Thus, the risk of disease spillover to humans is likely to be higher in these more disturbed habitats.