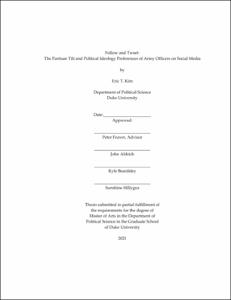 These findings were the result of data scraping the number of Democratic or Republican politicians each officer follows and the political content of what each officer tweets to determine partisan tilt and ideological preferences. These findings demonstrate little evidence of a politicized and partisan Army officer corps. Army officers are also unaware of how much political and personal information they expose on social media platforms. Army organizations and officers may benefit from reconsidering their use of social media as the information they provide may degrade the leadership of their units and bolster our adversaries’ information operations capabilities.