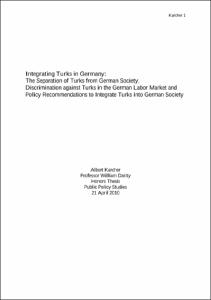 View / Download
1.4 Mb
Date
Author
Karcher, Albert
Repository Usage Stats
1,175
views
5,898
downloads
Abstract
This paper is divided into three parts. The first section of the paper investigates the signs as well as the underlying causes for Turks’ separation from “native” German society by looking at a number of studies and articles. The issue of Turkish integration is important because Turks are the largest immigrant group in Germany. Social integration is defined as: “the process of immigrants being accepted into equal membership in the host society” and the author finds that within this definition Turks are not socially integrated and remain separated from “native” German society. Turks separation from “native” German society is apparent in a number of measures of social integration. “Native” Germans refers to citizens who have German ancestry and have lived in Germany for the last several generations. A root cause of Turks’ separation is their tendency to live in isolated ethnic communities. As a result the German language skills of Turks are lesser to those of “native” Germans and other immigrant groups, which has a restrictive effect on Turks’ academic achievement and success in the job market. Furthermore, Turks remain culturally divided from “native” German society, and Turkish traditions such as wearing headscarves and honor killing create tension and misunderstanding with “native” Germans. Compared to other immigrants Turks interact little outside of their ethnic group and identify more with Turkey than other immigrant groups identify with their respective countries of origin. The German government is also responsible for Turks’ separation from German society due to its policies on immigration and citizenship. Because German citizenship policy is based on ius sanguinis the children of immigrants born in Germany do not automatically receive birthright citizenship and naturalization remains difficult. The German government has recently formed policy initiatives focused on integration, but the current institutions to manage integration remain weak and the “native” German population continues to harbor hostility toward immigrants. The second part of this paper focuses on the issue of discrimination in the German labor market. Analysis of the German Socio-Economic Panel (GSOEP) data by two different studies found that there is evidence of discrimination against foreigners in access to the German labor market, but no conclusive evidence of nationality based wage discrimination against foreigners (Constant et al, Lang). With these two studies as a starting point the author of this paper uses the GSOEP data to investigate whether there is evidence of wage discrimination against Turks and other foreigners in the most recent wave of the GSOEP data from 2007. The author ran regressions to compare the effect of nationality on hourly wage, while controlling for confounding factors such as age, gender and education. Similarly to previous studies the author found no significant evidence of wage discrimination against foreigners or Turks specifically. These results carry important implications for German integration policy. The third part of the paper focuses on the policy implications of Turk’s separation from German society and discrimination in the labor market, and recommends policies the German government should implement to facilitate integration. In order to integrate Turks into German society the German government has to make a concerted effort to improve Turks’ educational achievement and reduce economic disparities between Turks and “native” Germans. The issues of immigrants’ lateral mobility and wealth disparities between Turk’s and “native” Germans complicate this problem. If lateral mobility and wealth disparities contribute to Turks’ underachievement in school and low occupational status, affirmative action policies may be necessary to boost Turkish educational and occupational success. The German government should create a Ministry for Integration to handle this issue. Discrimination in access to the German labor market indicates that there is statistical discrimination against Turks when companies hire. The best solution to this problem is to implement a German anti-discrimination act.
Type
Honors thesis
Department
Public Policy Studies
Subject
integration, immigration, wage discrimination, Turks, Germany
Permalink
https://hdl.handle.net/10161/2315
Citation
Karcher, Albert (2010). Integrating Turks in Germany. Honors thesis, Duke University. Retrieved from https://hdl.handle.net/10161/2315.
Collections
More Info
Show full item record