Creation and Validation of a Polysocial Score for Mortality among Community-Dwelling Older Adults in the US: The Health and Retirement Study 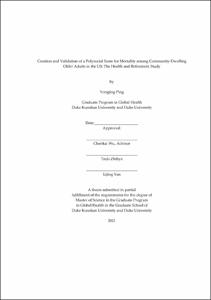 Background: The interrelatedness between social determinants of health impedes researchers to identify important social factors for health. Older populations have highly diverse social backgrounds, and a new approach is needed to quantify the aggregate effect of social factors and develop person-centered social interventions. We aim to create a polysocial score index to comprehensively assess the social and physical environments as well as their combined effect on health among older adults.Methods: We included a total of 7,383 adults, consisted of 3,651 participants in 2006 and 3,732 participants in 2008, who were at least 65 years and completed an additional psychosocial questionnaire in the Health and Retirement Study (HRS), a longitudinal study of a nationally representative sample of non-institutionalized residents in the United States. We searched the entire HRS data set and selected 24 social determinants of health encompassing five social domains: (1) economic stability, (2) neighborhood and physical environment, (3) education, (4) community and social context, and (5) health care system. The outcome was five-year mortality. We used a forward stepwise logistic regression model with a threshold of P-value equal to 0.1 to screen for important social factors; those having a 2-sided P value < 0.1 were retained in the final model. We assigned the polysocial score to each participant by summing the score for each social variable based on the raw coefficients of the regression model. The score of each variable was calculated as the absolute value of the raw coefficient times 10. Both continuous and categorical polysocial scores (low: 0-29, intermediate: 30-39, and high: 40+) were constructed. Participants with higher scores had a better social environment. Logistic regressions were used to assess the unadjusted and adjusted associations between polysocial score and five-year mortality. Demographic (age, gender, and race/ethnicity), lifestyles (body mass index, smoking status, and alcohol use), and health conditions (disability in activities of daily living, hypertension, diabetes, cancer, lung disease, heart disease, stroke, psychiatric disease, arthritis, and self-reported health) were included in the adjusted models. Interaction analyses were conducted in additive scales and multiplicative scales to evaluate whether the association between polysocial score and death was different by sex and race/ethnicity. Results: Polysocial score was created using 15 social determinants of health selected from 24 social determinants of health: total household income, total wealth, out-of-pocket medical expenditure, education level, employment status, marital status, type of house, regions of residence, used language, long-term care insurance coverage, life insurance coverage, social engagement, discrimination, stress level, and neighborhood social cohesion. The total score ranged from 7 to 59; the mean (SD) was 35.5 (7.5). Of the 7,383 participants, 491 (30.8%), 599 (17.2%), and 166 (7.8%) deaths occurred over five years among participants with a low (0-29), intermediate (30-39), and high (40+) polysocial score, respectively. In the fully adjusted logistic regression model in which polysocial score was modeled as a continuous variable, a one-point higher polysocial score was associated with 3% (Odds Ratio [OR]= 0.97; 95% CI, 0.96-0.98) lower odds of death over five years. In the fully adjusted model where polysocial score was modeled as a three-level categorical variable, the odds of death were 24% (Odds Ratio [OR]=0.76; 95% CI, 0.65-0.89) and 54% (OR=0.46; 95% CI, 0.36-0.59) lower among participants with an intermediate or high polysocial score, respectively, than those in the low category. Females had lower odds of mortality than males in the unadjusted logistic regression model. Results of racial/ethnic interaction analyses showed that Hispanic/Latino participants had lower five-year mortality (low: 17.2%; intermediate: 11.9%; high: 6.0%) than non-Hispanic white (low: 34.9%; intermediate: 17.9%; high: 7.3%) and other (low: 25.8%; intermediate: 14.3%; high: 6.3%) racial/ethnic subgroup in the additive scale, while we did not find a significant interaction between polysocial score and race/ethnicity in the multiplicative scale. Conclusions: We created a novel polysocial score including 15 social determinants of health encompassing multiple dimensions: economic stability, physical and neighborhood environment, education, community and social context, and the healthcare system. Higher polysocial score was significantly associated with lower five-year mortality among older adults in the US after adjusting for socio-demographic, lifestyles, and health conditions. The polysocial approach may offer possible solutions to monitor social environments and provide evidence-based suggestions for older adults to improve their social status for specific health outcomes.