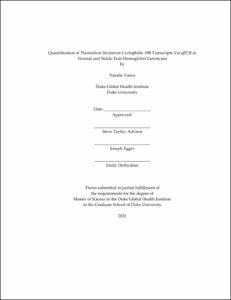 The sickle-cell trait hemoglobin genotype (HbAS) is known to protect against severe malaria caused by Plasmodium falciparum. However, the biological mechanisms behind this protection are not well understood. Cyclophilin 19B (PfCyP-19B) is a parasitic gene that produces the protein cyclophilin 19B, a member of the unfolded protein response that is important in parasitic protein folding and trafficking. We set out to measure the transcript expression level of PfCyP-19B to investigate its potential role in the mechanisms that confer protection for HbAS individuals. RNA was extracted from both in vivo samples collected from Malian children as well as in vitro samples harvested throughout a 48-hour incubation period. RNA extracts were reverse transcribed and transcript expression was measured via qPCR. Wilcoxon rank sum and bootstrapping methods were used to analyze transcript units between parasites grown in normal (HbAA) and HbAS red blood cells. The results from our cross-sectional in vivo data revealed under expression of PfCyP-19B among individuals with the HbAS genotype compared to those with the HbAA genotype (Wilcoxon rank sum p=0.006). In vitro time series results showed no significant difference in PfCyP-19B transcript expression levels between genotypes but did display a 24-hour pattern of peak expression for both HbAA and HbAS genotypes. The under expression of PfCyP-19B among HbAS individuals could be linked to impaired protein trafficking, interfering with the parasite’s ability to display surface proteins vital for cytoadherence and severe disease manifestation. The 24-hour peak transcript expression displayed in vitro roughly aligns with the P. falciparum parasite stage transition states, suggesting cyclophilin 19B may aid in parasitic transitions.