Prevalence and Associated Factors of Depression Among Middle-Aged and Older 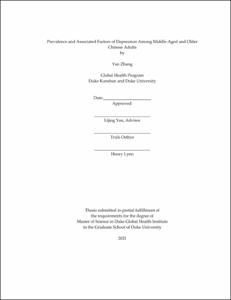 Background and Aim: Depression is a growing burden in China. There is limited national data on epidemiological studies of depression in China, as well as consistent estimates on the prevalence of depression. Therefore, we used data from two nationwide surveys to estimate prevalence of depression among middle-aged and older Chinese adults (by pre-determined subgroups). We also used multivariate analysis to explore main factors associated with depression among Chinese adults.Method: A nationally representative cross-sectional sample of 15,011 adults aged 45 to 79 years from the China Health and Retirement Longitudinal Study (CHARLS) and 8,140 adults aged 80 years and above from the Chinese Longitudinal Healthy Longevity Survey (CLHLS). Depressive symptoms were measure by the 10-item Center for Epidemiologic Studies Depression Scale (CESD-10), while probable depression was indicated by a CESD-10 score over 10. Prevalence rates of depression were estimated by age group (45-65, 65-79, 80+), sex (male, female), residence (rural, urban), and education level (no, some), incorporating sample weights. The associations between depression and marital status (married living with spouse, widowed, others including separated, unmarried), drinking status (never, former, current drinker), smoking status (never, former, current smoker), and any self-report disease (i.e., have at least one from hypertension, diabetes, cancer, lung disease, heart disease, stroke, arthritis, dyslipidemia, liver disease, kidney disease, digestive disease or not ) were examined in multivariate logistic regression and linear regression. Results: There was high prevalence of depression in middle-aged and older Chinese adults and a big difference between the two surveys, 35.0% for those aged 45-79 in CHARLS and 30.5% for those aged 80+ in CLHLS. Female, rural adults without any education had higher prevalence of depression in all age groups (45-64, 65-79, 80+). Being married but not living with spouse temporarily, separated, divorced, never married, self-reported any chronic disease were associated with higher odds of having probable depression and higher CESD-10 scores at all ages. In both age groups, being current drinker was associated with lower odds of having depression and lower CESD-10 scores. Smoking had little association with having depression in both age groups; but being a former smoker was associated with higher CESD-10 scores in CHARLS and lower scores in CLHLS. Conclusion: More attention should be devoted to the mental health of middle-aged and older Chinese adult, rural elderly women in particular. Future studies should also be aware of systematic difference when analyzing secondary data from different surveys.