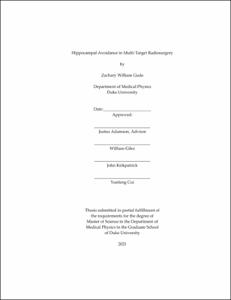 Brain metastases can occur in 20%-40% of cancer patients. Single isocenter multi-target (SIMT) radiosurgery planned with volumetric modulated arc therapy (VMAT) is a method of treating multiple brain metastases simultaneously. These treatments deliver high doses which emphasizes the need for accuracy and avoidance of critical neurological structures to maintaining a patient’s quality of life (QOL). QOL is highly correlated to patient memory, suggesting the hippocampus as a critical structure to avoid in treatment due to its significant role in episodic memory development. Radiosurgery treatments commonly use specialized MLC leaves (HD) that have a narrower width to improve dose conformity around metastases. This work serves to evaluate the feasibility of avoiding the hippocampus in SIMT treatments using VMAT based on MLC leaf width, as well as the effects of hippocampal avoidance on plan quality.40 patients, each previously treated with SIMT planned with VMAT for between 4-10 brain metastases using HD-MLCs, enrolled in an IRB approved protocol. The plans were evaluated for meeting RTOG 0933 recommended dose constraints to the hippocampus. If constraints were not met, then treatments were replanned with optimization objectives added to the hippocampus and/or arc orientation adjustments to meet constraints without compromising target coverage or other organ-at-risk (OAR) dose constraints. Afterwards, the treatments both with and without hippocampal objectives were replanned using standard width MLC leaves (SD-MLCs). All 4 plan types were then evaluated for plan quality using conformity index, V20%[cc], V50%[cc], V75%[cc] and D50%[cGy]. 8 total hippocampi across 7 patient plans exceeded constraints. 4 of these hippocampi could be spared through optimization objective adjustment, and 1 more with an arc orientation adjustment. Biological effective dose (BED) to the 8 hippocampi decreased by 29% ± 23% (p= 0.007) with no significant changes in dose to normal tissue when planned with the addition of hippocampal objectives. SD-MLCs showed similar results, sparing the same 5 of the 8 hippocampi exceeding constraints, but also increased dose to healthy tissue, most substantially in V20%[cc] which increased 59.56% ± 53% (p= 0.015) and 48.22% ± 32.17% (p= 0.0056) in plans with and without hippocampal objectives respectively. Also, in plans both with and without hippocampal optimization objectives, there was no significant change in conformity index when switching MLCs from HD to SD leaves. Meeting recommended hippocampal constraints was possible in 57% of patients that initially exceeded constraints. The ability to spare this structure was independent of MLC width, and correlated to the distance between the hippocampus and the nearest target. From this data set, the smallest distance avoidable was 0.45cm. All un-avoided hippocampi were at least touching a target, if not overlapped. The larger MLC leaves resulted in higher doses to larger volumes of normal tissue, however the planning technique of VMAT was able to meet target coverage without compromising treatment conformity when larger MLC leaves were used.