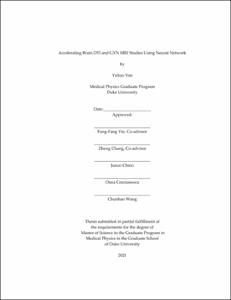 There always exists a demand to accelerate the time-consuming MRI acquisition process. Many methods have been proposed to achieve this goal, including deep learning method which appears to be a robust tool compared to conventional methods. While many works have been done to evaluate the performance of neural networks on standard anatomical MR images, few attentions have been paid to accelerating other less conventional MR image acquisitions. This work aims to evaluate the feasibility of neural networks on accelerating Brain DTI and Gynecological Brachytherapy MRI. Three neural networks including U-net, Cascade-net and PD-net were evaluated. Brain DTI data was acquired from public database RIDER NEURO MRI while cervix gynecological MRI data was acquired from Duke University Hospital clinic data. A 25% Cartesian undersampling strategy was applied to all the training and test data. Diffusion weighted images and quantitative functional maps in Brain DTI, T1-spgr and T2 images in GYN studies were reconstructed. The performance of the neural networks was evaluated by quantitatively calculating the similarity between the reconstructed images and the reference images, using the metric Total Relative Error (TRE). Results showed that with the architectures and parameters set in this work, all three neural networks could accelerate Brain DTI and GYN T2 MR imaging. Generally, PD-net slightly outperformed Cascade-net, and they both outperformed U-net with respect to image reconstruction performance. While this was also true for reconstruction of quantitative functional diffusion weighted maps and GYN T1-spgr images, the overall performance of the three neural networks on these two tasks needed further improvement. To be concluded, PD-net is very promising on accelerating T2-weighted-based MR imaging. Future work can focus on adjusting the parameters and architectures of the neural networks to improve the performance on accelerating GYN T1-spgr MR imaging and adopting more robust undersampling strategy such as radial undersampling strategy to further improve the overall acceleration performance.