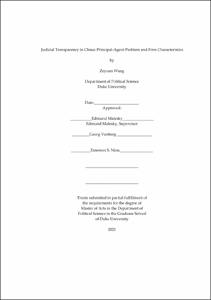 The thesis discusses the principal-agent problem in authoritarian countries during the practice of judicial transparency. In specific, it studies what motivates Chinese courts to be partially obedient under mandatory disclosure policies, as opposed to strictly disclosing as instructed. I empirically test how ownership structure and political connections of firms affect courts’ final decisions in implementing transparency on intellectual property litigations. I create a case-level dataset from 2007 to 2017 by comparing the IP litigations claimed by listed firms and the litigation disclosure conducted by the local courts later. The empirical results suggest that local courts defend the interests of SOEs by not disclosing litigations involving these firms, but they do not give preferential treatment to politically connected firms alone. This study sheds light on the principal-agent problem in China’s judicial branch, and explains the incentives of the local courts in making their own decisions.