Killing Me Softly in a Metropolis: Tales of Murder and Murderous Passion in Republican Shanghai (1911-1937) 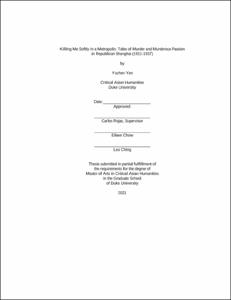 The relationship between metropolitan cities around the world and tales of murder has encompassed the complicated nature of modern life, and such is also the case of Shanghai in the Republican era. The prosperity of the print industry in Shanghai, in the first few decades of the 20th century, has intertwined profoundly with Shanghai’s reform culture that denotes different literary currents, ideological transformations and changes of everyday life, all of which pertain to cultural exchanges with the West. Such a socio-cultural context not only determines the material basis and the agencies of the production, circulation and reception of murder narratives, but also influences the cognitive and conceptual apparatuses that position murderous violence in different spectacles of political movements, social conventions and knowledge production. In this thesis, I examine tales of murders in various literary texts in Republican Shanghai before 1937, the first metropolis in Republican China and also one of the most famous cosmopolitan cities in a semicolonial society in the first half of the 20th century. I mainly focus on murder narratives in three different forms of texts: the newspaper coverage of murder cases and their aftermath represented by reports on Shen Bao 申報，the detective stories in the Huo Sang and Lu Ping series written by two illustrious Shanghainese authors, Cheng Xiaoqing and Sun Liaohong, and depictions of murder and murderous violence in the works of authors that are commonly grouped as Neo-sensationalist School. Besides the issue of genre, what also matter in this categorization are the narrative techniques they deploy and the different lenses they choose in approaching murders. Informed by Thomas de Quincey’s method of examining murder as a cultural phenomenon, instead of limiting it to the field of psychiatric analyses or legal practices, this thesis also deploys theories of nationalism, sexuality, flâneurie, surrealism and psychoanalysis to unpack how the tales of murder in Shanghai project discourses of Chinese modernity as a site of contestations multilayered with different forces. I therefore argue that the tales of murder have conjured up a domain of imagination that serves as an undercurrent of Chinese cultural history. The complexity of the cultural production concerning murder encounters the complex nature of the issue of Shanghai modern ranging from female rights, national formation, the role of intellectuals and leftist turn in reform culture, and linking to this, the ambiguity of the position of literature in a modernizing society.