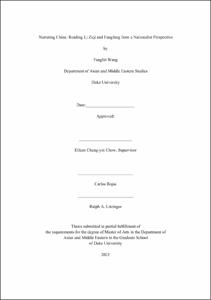 This thesis is a study of the possibility and boundaries of narrating contemporary China, a country in which nationalism is one of the dominant ideologies. It revolves around the dichotomy—the hypervisibility and invisibility of nationalism—which normalizes the omnipresence of nationalist sentiments in the everyday Chinese experience. The thesis first offers a general discussion about the discourse of contemporary Chinese nationalism. Then, it closely examines two case studies, the Chinese vlogger Li Ziqi whose videos have gained global popularity, and Chinese author Fangfang whose online diary documenting Wuhan’s COVID-19 outbreak received challenged reception on Chinese social media. The two seemingly apolitical projects eventually raised nationalist sentiments of Chinese Internet users, who praised Li Ziqi for promoting traditional Chinese culture to the world and attacked Fangfang for undermining global views of China during the pandemic. The two media representations generate two different national identities of the present-day China: an anti-modern, neo-traditional civilization and a modern, impeccable global leader. I conclude with the argument that the contradictory opinions on modernity in Chinese national identity construction is a confusion generated in modernization. They are essentially the legacy of the confrontation between historical Sino-centrism and western modernity.