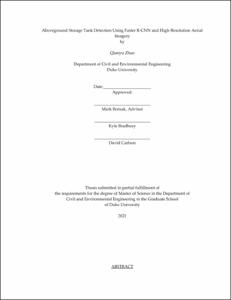 In recent years, NaTech disasters, which are defined as the technological accidents caused by natural events, have led to huge losses all over the world. To reduce these losses, assessments of the vulnerabilities of industrial facilities are necessary. In this study, an effort was made to locate aboveground storage tanks from remotely sensed imagery. A dataset that identifies different types of tanks was generated. The data were acquired from the National Agriculture Imagery Program (NAIP) and tanks were labeled as closed roof tank, external floating roof tank, spherical tank, water treatment tank, or water tower according to their shapes. After collecting these data, the Faster R-CNN algorithm, an object detection architecture, was applied to test the performance of this algorithm on the prelabeled dataset. Results of testing indicate that the algorithm could well achieve the goal that having a high recall rate for all the classes of tanks. The precision and recall rates were 82.92% and 90.03% for closed roof tanks, 85.85% and 91.68% for external floating roof tanks, 34.81% and 60.26% for spherical tanks, 49.63% and 89.33% water treatment tanks, 9.43% and 38.46% for water towers. For spherical tanks and water towers, although having low precision and recall, the percentage of missed tanks was extremely low, which is 2.08% and 0 respectively. These results suggest that this aboveground storage tank dataset and the pretrained model generated from Faster R-CNN could be further used in future work for tank detection and vulnerability assessment.