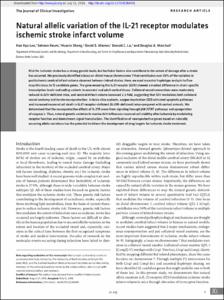 Associate Professor in Neurobiology
Dr. Lo's laboratory focuses on the translation of basic neuroscience research into the identification new drug candidates and targets for neuropsychiatric diseases including Alzheimer's disease, Huntington's disease, stroke, and glaucoma. In this context, the laboratory has developed a series of discovery technologies, based on high-content screening and chemical genetics, to drive towards the efficient identification of new neurological drug candidates with strong likelihood of clinical s
This author no longer has a Scholars@Duke profile, so the information shown here reflects their Duke status at the time this item was deposited. Professor of Molecular Genetics and Microbiology
Vascular Morphogenesis: A Human Genetics Approach Advances in our understanding of fundamental biological events can often be made by the analysis of defects manifested in inherited diseases. The genes responsible for these genetic syndromes often encode proteins that act at critical points of the pathways that control fundamental biological processes such as cell division, differentiation, and cell death. This approach has lead to the discovery of novel gene products and/or biochem Distinguished Distinguished Professor of Anesthesiology, in the School of Medicine
Humans may sustain a variety of forms of acute central nervous system injury including ischemia, trauma, vasospasm, and perinatal hypoxemia. The Multidisciplinary Neuroprotection Laboratories is dedicated to examining the pathophysiology of acute brain and spinal cord injury with particular reference to disease states managed in the perioperative or neurointensive care environments. Rodent recovery models of cerebral ischemia, traumatic brain injury, cardiopulmonary bypass, subarachnoid he
This author no longer has a Scholars@Duke profile, so the information shown here reflects their Duke status at the time this item was deposited.
Alphabetical list of authors with Scholars@Duke profiles.