Characterization of the ubiquitin-modified proteome regulated by transient forebrain ischemia. 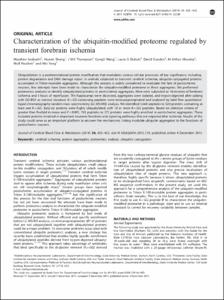 Professor in Anesthesiology
My research interests are understanding the mechanisms underlying induction of cell death induced by a severe form of cellular stress. I am particularly interested in the role of the endoplasmic reticulum in the pathological process induced by transient cerebral ischemia and culminating in neuronal cell death. This pathological process is associated with an irreversible suppression of protein synthese that limits the ability of cells to withstand ischemia-induced impairment of endoplasmic r Adjunct Assistant Professor in the Department of Pharmacology & Cancer Biology
Dr. Thompson's research focuses on the development and deployment of proteomics and metabolomics mass spectrometry techniques for the analysis of biological systems. He served as the Assistant Director of the Proteomics and Metabolomics Shared Resource in the Duke School of Medicine from 2007-2021. He currently maintains collaborations in metabolomics and proteomics research at Duke, and develops new tools for chemical analysis as a Princi