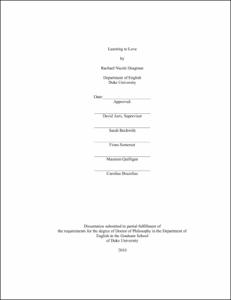 This study examines medieval edification in all of its rich senses: moral improvement, the building up of community, and the construction of a city or edifice. Drawing from medieval literature, religious writing and architectural sources, my dissertation investigates virtue formation and explores what kinds of communities nourish or hinder those virtues. The Christian virtue of love stands at the center of my project. Drawing from the work of Alasdair MacIntyre, I show that medieval Christians learn the craft of love in a lifelong process into which they are initiated as apprentices to those who teach the craft in the Church. For parishioners in late medieval England, apprenticeship in the craft of love entails participation in sacramental practice, particularly in the sacrament of penance.

Chapter one considers <italic>Jacob's Well </italic>, a fifteenth-century penitential manual written by an anonymous author that uses architectural allegory to describes the penitential process. I argue that the author, a self-proclaimed "man of craft," apprentices the reader into sacramental practice. The author is both an exemplar to the reader and apprenticed to Christ. In chapter two, I explore the role of the narrative exempla in <italic>Jacob's Well</italic>. The exempla often resist the paradigm set forth in the allegory of the well. My chapter shows that learning to read these stories trains the reader to recognize forgiveness and sin in others and then to use this recognition to evaluate one's own story. Chapter three considers William Langland's richly complex fourteenth-century poem, <italic>Piers Plowman</italic>. The horrible failures of the sacrament of penance in this poem cause the Church to crumble. The allegorical Wille is left within this Church with the enjoinder to "learn the craft of love." For Wille to learn the craft of love means more than learning to forgive and to be forgiven - it means learning to be charitable. For Langland, a charitable Church is yet to be practiced, yet to be constructed. My last chapter examines <italic>Pearl</italic>, a late fourteenth-century apocalyptic allegory written by an anonymous poet. The poem opens with a jeweler lamenting the loss of his pearl in a garden. As the poem progresses it becomes clear that the jeweler is a father who mourns the death of his infant daughter. In a dream vision, his daughter appears to him as a Pearl Maiden, one of the 144,000 virgins from the Book of Revelations. In an inversion of the usual parent-child relationship, the Pearl Maiden teaches the jeweler to recognize that their interlocking narratives stem from the same Christian tradition, although his particular narrative is one of penitential practice and hers is one of grace. The Pearl poet's architectural allegory focuses on the completed City of New Jerusalem rather than on the upbuilding or crumbling of the Church.