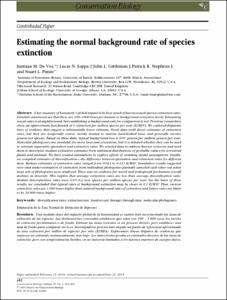 View / Download
1.2 Mb
Date
Authors
De Vos, Jurriaan M
Joppa, Lucas N
Gittleman, John L
Stephens, Patrick R
Pimm, Stuart L
Repository Usage Stats
41
views
29
downloads
Abstract
A key measure of humanity's global impact is by how much it has increased species extinction rates. Familiar statements are that these are 100-1000 times pre-human or background extinction levels. Estimating recent rates is straightforward, but establishing a background rate for comparison is not. Previous researchers chose an approximate benchmark of 1 extinction per million species per year (E/MSY). We explored disparate lines of evidence that suggest a substantially lower estimate. Fossil data yield direct estimates of extinction rates, but they are temporally coarse, mostly limited to marine hard-bodied taxa, and generally involve genera not species. Based on these data, typical background loss is 0.01 genera per million genera per year. Molecular phylogenies are available for more taxa and ecosystems, but it is debated whether they can be used to estimate separately speciation and extinction rates. We selected data to address known concerns and used them to determine median extinction estimates from statistical distributions of probable values for terrestrial plants and animals. We then created simulations to explore effects of violating model assumptions. Finally, we compiled estimates of diversification-the difference between speciation and extinction rates for different taxa. Median estimates of extinction rates ranged from 0.023 to 0.135 E/MSY. Simulation results suggested over- and under-estimation of extinction from individual phylogenies partially canceled each other out when large sets of phylogenies were analyzed. There was no evidence for recent and widespread pre-human overall declines in diversity. This implies that average extinction rates are less than average diversification rates. Median diversification rates were 0.05-0.2 new species per million species per year. On the basis of these results, we concluded that typical rates of background extinction may be closer to 0.1 E/MSY. Thus, current extinction rates are 1,000 times higher than natural background rates of extinction and future rates are likely to be 10,000 times higher.
Type
Journal article
Subject
Animals
Chordata
Invertebrates
Plants
Conservation of Natural Resources
Phylogeny
Models, Biological
Fossils
Computer Simulation
Extinction, Biological
Biological Evolution
Permalink
https://hdl.handle.net/10161/23550
Published Version (Please cite this version)
10.1111/cobi.12380
Publication Info
De Vos, Jurriaan M; Joppa, Lucas N; Gittleman, John L; Stephens, Patrick R; & Pimm, Stuart L (2015). Estimating the normal background rate of species extinction. Conservation biology : the journal of the Society for Conservation Biology, 29(2). pp. 452-462. 10.1111/cobi.12380. Retrieved from https://hdl.handle.net/10161/23550.
This is constructed from limited available data and may be imprecise. To cite this article, please review & use the official citation provided by the journal.
Collections
More Info
Show full item record Doris Duke Distinguished Professor of Conservation Ecology in the Nicholas School of the Environment and Earth Sciences
Stuart Pimm is a world leader in the study of present-day extinctions and what can be done to prevent them. His research covers the reasons why species become extinct, how fast they do so, the global patterns of habitat loss and species extinction and, importantly, the management consequences of this research. Pimm received his BSc degree from Oxford University in 1971 and his Ph.D. from New Mexico State University in 1974. Pimm is the author of over 350 scientific papers and five books. He i