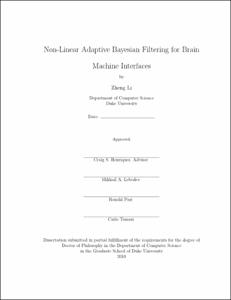 Brain-machine interfaces (BMI) are systems which connect brains directly to machines or computers for communication. BMI-controlled prosthetic devices use algorithms to decode neuronal recordings into movement commands. These algorithms operate using models of how recorded neuronal signals relate to desired movements, called models of tuning. Models of tuning have typically been linear in prior work, due to the simplicity and speed of the algorithms used with them. Neuronal tuning has been shown to slowly change over time, but most prior work do not adapt tuning models to these changes. Furthermore, extracellular electrical recordings of neurons' action potentials slowly change over time, impairing the preprocessing step of spike-sorting, during which the neurons responsible for recorded action potentials are identified.

This dissertation presents a non-linear adaptive Bayesian filter and an adaptive spike-sorting method for BMI decoding. The adaptive filter consists of the n-th order unscented Kalman filter and Bayesian regression self-training updates. The unscented Kalman filter estimates desired prosthetic movements using a non-linear model of tuning as its observation model. The model is quadratic with terms for position, velocity, distance from center of workspace, and velocity magnitude. The tuning model relates neuronal activity to movements at multiple time offsets simultaneously, and the movement model of the filter is an order n autoregressive model.

To evaluate the proposed methods, experiments were performed with 3 Rhesus monkeys implanted with micro-wire electrode arrays in arm-related areas of the cortex. Off-line reconstructions and on-line, closed-loop experiments with brain-control show that the n-th order unscented Kalman filter is more accurate than previous linear methods. Closed-loop experiments over 29 days show that Bayesian regression self-training helps maintain control accuracy. Experiments on synthetic data show that Bayesian regression self-training can be applied to other tracking problems with changing observation models. Bayesian clustering updates on synthetic and neuronal data demonstrate tracking of cluster and waveform changes. These results indicate the proposed methods improve the accuracy and robustness of BMIs for prosthetic devices, bringing BMI-controlled prosthetics closer to clinical use.