The Case for Reparations: The Social Gospel of Walter Rauschenbusch, and a Program to Understand and Close the Racial Wealth Gap 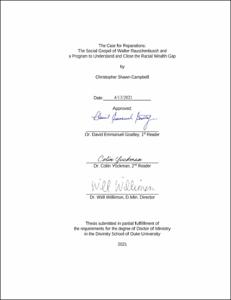 Considerable attention is being given to the growing problem of the racial wealth gap in the United States of America. Understanding this chasm requires a critique of the government’s imprimatur on the institution of slavery, the legalization of Jim Crow, and the myriad of ways institutional racism has been suffused into the fabric of America , directly impacting African Americans ability to acquire and accumulate wealth. After the official end of slavery in 1865, the Emancipated were promised a type of reparations in the form of “40 acres and a mule.” However, with the assassination of President Abraham Lincoln, his successor Andrew Johnson rescinded the order, forcing blacks into quasi-slavery in the form of vagrancy laws, sharecropping and convict leasing. Then, the next fifty years of Jim Crow segregation effectively allowed the country to improvise new ways to subjugate blacks into a new caste system with alternative laws at the hands of the political and economic elite, this was especially prevalent in those areas once reliant upon slave labor. Blacks were routinely subjected to literacy tests, black codes, vagrancy laws, poll taxes and grandfather clauses, which were meant to restrict political participation, economic inclusion and social integration, lasting from 1877 well into the 1950s. This research proposes that the commodification of black bodies served as the underpinning of American capitalism, and demonstrates how slave labor across the South, benefitted other parts of the country, even the world, and served as the driving force behind an emerging national economic system. The amalgamation of two-hundred and forty-six years of enslavement, ninety years of legalized Jim Crow segregation, sixty years of separate but equal and thirty-five years of racist housing policies, locked generations out of economic opportunity and gave rise to ubiquitous pathologies across the nation. These and other injustices were supported by local municipalities and bolstered by the United States Federal Government, which warrants a substantial justice claim. In 1989, the late John Conyers (D-MI.) began presenting a bill before the House of Representatives to develop a commission to merely study the social effects of slavery, segregation and its continuing economic implications. The bill has remained tabled in the House of Representatives for the past thirty years. In a historic move in 2019, a group of panelists were able to present cogent arguments before the House of Representative, debating the pros and cons of reparations, however since the landmark hearing, no further action has been taken on the matter. This research aims to justify a reparations program by establishing the myriad of ways historical kleptocracy, state-sanctioned segregation and federally supported laws set the stage for the current and ever-growing racial wealth gap. To construct this argument, I draw upon historical, sociological, theological and political scholarship, in an effort to establish the United States of America has yet to atone for the moral injury of slavery and should be held culpable for its lingering effects. Therefore, I propose the federal government should be held responsible for acknowledging, redressing and bringing closure to these and other reprehensible acts, and a mea culpa is only one step toward national healing and wholeness. I utilize Walter Rauschenbusch’s work, Christianizing the Social Order which examines the symbiotic relationship between Christianity and social reform, as he critiqued the economic conditions of his day and argued for radical social, political, and economic changes in the structures that crippled the vulnerable and the underserved. His understanding of reform and justice could play a vital role in moving the Church and the nation toward penance. In this work, I propose that reparations are not only a moral claim but a biblical and theological mandate, that will be analyzed and synthesize through past and contemporary scholarship. I will conclude with the idea that reparations are the only actionable recourse that will effectively close the racial wealth gap, in order to facilitate wholeness for the American descendants of slaves. This research will conclude that cumulative injustices leveraged against Blacks have had damaging effects on the present, and many of the injustices were supported and sanctioned by the United States Federal Government and executed by state legislatures. Therefore, my research argues that the federal government should be held culpable for the current social, political and economic damages experienced by contemporary African Americans.