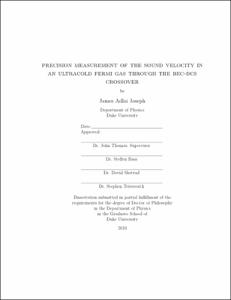 A trapped Fermi gas near a collisional resonance provides a unique laboratory for testing many-body theories in a variety of fields. The ultracold Fermi gas produced in our lab is comprised of the lowest two spin states of $^6$Li. At 834 G there is a collisional or Feshbach resonance between the two spin states. The scattering length between trapped atoms of opposing spins far exceeds the interparticle spacing of the gas. On resonance, a strongly interacting, unitary, Fermi gas is created which exhibits universal behavior. The unitary Fermi gas is a prototype for other exotic systems in nature from nuclear matter to neutron stars and high temperature superconductors.

For magnetic fields less than 834 G the scattering length is positive, and pairs Fermi atoms can form molecular dimers. These dimers, comprised of two fermions, are bosons. At ultracold temperatures the molecular bosons populate the lowest energy level and form a Bose Einstein Condensate (BEC). For magnetic fields greater than 834G the scattering length between fermions in opposing spin states is negative, like Cooper pairs formed between electrons in a superconductor. The Bardeen, Cooper, and Shriefer (BCS) theory was developed to describe the pairing effect in the context of superconductors. In our experiment we produce an ultracold unitary gas. By tuning the magnetic field to either side of the Feshbach resonance we can transform the gas into a weakly interacting BEC or BCS superfluid. Therefore, the region near a Feshbach resonance is called the BEC-BCS crossover.