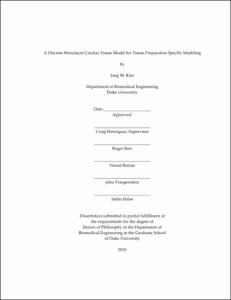 Engineered monolayers created by using microabrasion and micropatterning methods have provided a simplified in vitro system to study the effects of anisotropy and fiber direction on electrical propagation. Interpreting the behavior in these culture systems has often been performed using classical computer models with continuous properties. Such models, however, do not account for the effects of random cell shapes, cell orientations and cleft spaces inherent in these monolayers on the resulting wavefront conduction. Additionally when the continuous computer model is built to study impulse propagations, the intracellular conductivities of the model are commonly assigned to match impulse conduction velocity of the model to the experimental measurement. However this method can result in inaccurate intracellular conductivities considering the relationship among the conduction velocity, intracellular conductivities and ion channel properties. In this study, we present novel methods for modeling a monolayer cardiac tissue and for estimating intracellular conductivities from an optical mapping. First, in the proposed method for modeling a monolayer of cardiac tissue, the factors governing cell shape, cell-to-cell coupling and the degree of cleft space are not constant but rather are treated as spatially random with assigned distributions. This approach makes it possible to simulate wavefront propagation in a manner analogous to performing experiments on engineered monolayer tissues. Simulated results are compared to reported experimental data measured from monolayers used to investigate the role of cellular architecture on conduction velocities and anisotropy ratios. We also present an estimate for obtaining the electrical properties from these networks and demonstrate how variations in the discrete cellular architecture affect the macroscopic conductivities. The simulation results agree with the common assumption that under normal ranges of coupling strengths, tissues whose cell shapes and connectivity show relatively uniform distributions can be represented using continuous models with conductivities derived from random discrete cellular architecture using either estimates. The results also reveal that in the presence of abrupt changes in cell orientation, local estimates of tissue properties predict smoother changes in conductivities that may not adequately predict the discrete nature of propagation at the transition sites. Second, a novel approach is proposed to estimate intracellular conductivities from the optical mapping of the monolayer cardiac tissue under subthreshold stimulus. This method uses a simplified membrane model, which represents the membrane as a second order polynomial of the membrane potential. The simplified membrane model and the intracellular conductivities are estimated from the optical mapping of the monolayer tissue under the subthreshold stimulus. We showed that the proposed method provides more accurate intracellular conductivities compared to a method using a constant membrane resistance.