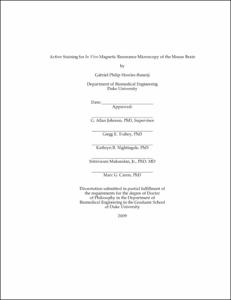 Mice have become the preferred model system for studying brain function and disease. With the powerful genetic tools available, mouse models can be created to study the underlying molecular basis of neurobiology in vivo. Just as magnetic resonance imaging is the dominant tool for evaluating the human brain, high-resolution MRI--magnetic resonance microscopy (MRM)--is a useful tool for studying the brain of mouse models. However, the need for high spatial resolution limits the signal-to-noise ratio (SNR) of the MRM images. To address this problem, T1-shortening contrast agents can be used, which not only improve the tissue contrast-to-noise ratio (CNR) but also increase SNR by allowing the MR signal to recover faster between pulses. By "actively staining" the tissue with these T1-shortening agents, MRM can be performed with higher resolution, greater contrast, and shorter scan times. In this work, active staining with T1-shortening agents was used to enhance three types of in vivo mouse brain MRM: (1) angiographic imaging of the neurovasculature, (2) anatomical imaging of the brain parenchyma, and (3) functional imaging of neuronal activity.

For magnetic resonance angiography (MRA) of the mouse, typical contrast agents are not useful because they are quickly cleared by the body and/or extravasate from the blood pool before a high-resolution image can be acquired. To address these limitations, a novel contrast agent--SC-Gd liposomes--has been developed, which is cleared slowly by the body and is too large to extravasate from the blood pool. In this work, MRA protocols were optimized for both the standard technique (time-of-flight contrast) and SC-Gd liposomes. When the blood was stained with SC-Gd liposomes, small vessel CNR improved to 250% that of time-of-flight. The SC-Gd liposomes could also be used to reduce scan time by 75% while still improving CNR by 32%.

For MRM of the mouse brain parenchyma, active staining has been used to make dramatic improvements in the imaging of ex vivo specimens. However for in vivo imaging, the blood-brain barrier (BBB) prevents T1-shortening agents from entering the brain parenchyma. In this work, a noninvasive technique was developed for BBB opening with microbubbles and ultrasound (BOMUS). Using BOMUS, the parenchyma of the brain could be actively stained with the T1-shortening contrast agent, Gd-DTPA, and MRM images could be acquired in vivo with unprecedented resolution (52 x 52 x 100 micrometers3) in less than 1 hour.

Functional MRI (fMRI), which uses blood oxygen level dependant (BOLD) contrast to detect neuronal activity, has been a revolutionary technique for studying brain function in humans. However, in mice, BOLD contrast has been difficult to detect and thus routine fMRI in mice has not been feasible. An alternative approach for detecting neuronal activity uses manganese (Mn2+). Mn2+ is a T1-shortening agent that can enter depolarized neurons via calcium channels. Thus, Mn2+ is a functional contrast agent with affinity for active neurons. In this work, Mn2+ (administered with the BOMUS technique) was used to map the neuronal response to stimulation of the vibrissae. The resultant activation map showed close agreement to published maps of the posterior-lateral and anterior-medial barrel field of the primary sensory cortex.

The use of T1-shortening agents to actively stain tissues of interest--blood, brain parenchyma, or active neurons--will facilitate the use of MRM for studying mouse models of brain development, function, and disease.