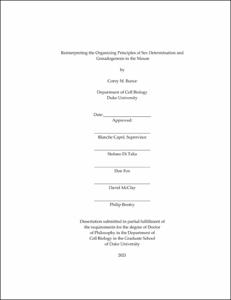 The mouse gonad begins its development as a bipotential primordia, capable of developing into a testis or ovary depending on the presence of the sex-determining gene, Sry. In the XY gonad, opposing pro-testis and pro-ovary pathways compete in gonadal supporting cells. While the individual cellular decision process is well understood, the higher-level process of coordination of cell fates across the gonad remains to be explained. The testis and ovary exhibit distinct patterns of differentiation, suggesting that either development of each organ requires a particular organizing principle or bipotentiality requires regional separation for fate specification or stabilization. The overall goal of this work is to improve characterizations of the spatiotemporal features of sex determination and gonadogenesis, including cell fate organization, morphogenic processes, and system context.Though several hypotheses have connected gonad morphogenesis to sex determination, the morphogenic processes that occur in the gonad have not been sufficiently characterized for formulating testable hypotheses. To capture and analyze the complexity of genital ridge morphogenesis, we generated a 3-dimensional time course of gonad development in native form and context using whole embryo tissue clearing and light sheet microscopy. Analysis revealed that the early gonad exhibits anterior-to-posterior patterns as well as increased rates of growth, rotation, and separation in the central domain. In extending characterization to the neighboring nephric ducts, we found a close alignment of gonad and mesonephric duct movements as well as delayed duct development in Cbx2 mutants, which undergo XY sex reversal and gonad dysgenesis. These data support mechanical integration of gonad and mesonephric duct morphogenesis. In investigating the mechanisms underlying the center-to-pole pattern of testis differentiation, we performed anteroposterior axis analyses and ex vivo gonad reconstruction cultures. These experiments allowed us to rule out two commonly accepted theories in the field: paracrine relay and center-first Sry expression. After searching for patterns in other cellular processes during gonadogenesis, including cell cycle arrest and coelomic epithelium proliferation, we uncovered a center-biased pattern of supporting cell precursor ingression. The updated model indicates that differences between the patterns of differentiation in the testis and ovary are due to features of their respective regulatory networks connecting their fate dynamics to different general gonadal organizing principles acting upstream of supporting cell differentiation. Following recent work on the rete testis and rete ovarii suggesting these structures contribute to gonadal supporting cell populations, we characterized early development of the rete and adjacent tissues in both sexes. Comparison of the GATA4+/PAX8+ presumptive rete with mesonephric and gonadal cells led to the identification of undescribed patterns in mesonephros development which may play a role in sexual dimorphism of the rete. Cells of the rete may derive from mesonephric condensates in a process similar to kidney nephron development. Cell cycle analysis revealed the mesonephric tubules and early rete to be a largely non-proliferating population of cells, suggesting expansion through recruitment of new cells. These results were used to establish preliminary theories for lineage relationships in early urogenital development. Initial attempts at lineage tracing to test the theory were unsuccessful. The findings presented here contribute to a more comprehensive and systems level understanding of sex determination and gonad development. In particular, the incorporation of high-resolution spatial information into theories of sex determination serves to connect individual cell fate decisions to organ level patterns of differentiation in space and time. These results will be useful for novel hypothesis generation as well as for designing more detailed models and simulations of sex determination and gonadogenesis.