Figural Reading in the Epistle to the Hebrews: A Dialogue with Augustine and Calvin 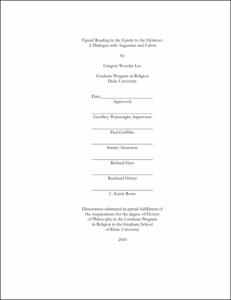 This exercise in constructive Christian theology presents the relation between the testaments as a critical problematic for the figural reading of the Old Testament. The project consists of two parts, the first focusing on Augustine and Calvin, and the second primarily on the Epistle to the Hebrews.

The first part provides a typological comparison between Augustine and Calvin on the continuity and discontinuity of the testaments (chapters 1-2), the people of God across the testaments (chapter 3), and the purpose of Scripture in redemptive history (chapter 4). Augustine defines the unity of the testaments according to a sign-referent framework whereby the Old Testament signifies the New. Calvin, on the other hand, locates this unity in the one covenant, grounded in Christ across the testaments. Since Augustine thinks the grace of the New Testament was veiled before the time of Christ, he asserts the necessity of interpreting the Old Testament according to two levels of meaning: the literal and the spiritual. Since Calvin thinks both the Old and New Testaments reveal the knowledge of God, he restricts interpretation to the literal sense, though this sense can have multiple referents: Israel, Christ, the church, and the eschaton. Each figure struggles to account for Israel and the Old Testament saints. For Augustine, the saints belonged to the New Testament as they mediated the Old. Calvin alternately identifies Israel as the church during Old Testament times, and the Old Testament saints as redemptive-historical aberrations.

The second part draws upon this typological comparison to consider the Epistle to the Hebrews with reference to its depiction of redemptive history (chapter 5), its appropriation of the Psalms (chapter 6), and its overarching vision of Scripture (chapter 7). Hebrews locates the discontinuity between the testaments in the establishment of Christ as high priest, and the continuity in a common people and a common hope for an eternal inheritance. The author interprets the Psalms neither according to two levels of meaning, nor within an expansive literal sense, but as a living word of address whereby God speaks directly to his people. Old Testament locutions retain their illocutionary force, but adopt new valence in light of Christ. The authority of Scripture, then, rests not in some historically reconstructed sense, but in God's self-communicative act in the redemptive-historical present.