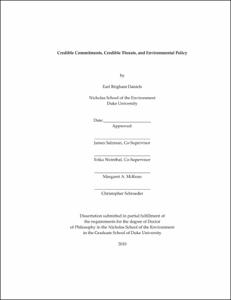 This dissertation includes three articles. In different ways, each focuses on the way credible threats and credible commitments are used to moderate consumption of environmental and natural resources and commons resources more generally. The first of these three argues that the trend of states jockeying to hold presidential primaries and caucuses as early as possible is a classic tragedy of the commons. This article argues that recognizing the problem as a commons dilemma provides a powerful explanation for the trend towards earlier primaries and, more importantly, provides insights into how best to reform the nomination system. The second applies the work of Thomas Schelling--particularly that focuses on nuclear deterrence--to particularly large regulatory tools given to agencies. The article uses game theory to explain why Congress would give agencies unusually large sticks and how agencies use them. The last article reexamines the foundational literature devoted to overcoming the tragedy of the commons. Specifically, the article argues that institutions most able to solve the tragedy of the commons often cause a tragedy of another sort. The article ends by proposing a set of draft principles to help us overcome institutional rigidity.