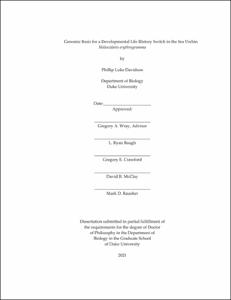 Lecithotrophic (non-feeding) larval development has independently evolved numerous times in marine invertebrates from an ancestral, planktotrophic (feeding) larval state. The evolution of this developmental mode in a species is accompanied by dramatic changes in ecology and development, including lower fecundity, higher maternal investment per offspring, changes in egg composition, alteration of embryonic fate specification, morphologically simple larvae, and reduced time to metamorphosis. Thus, the evolutionary switch between lecithotrophy and planktotrophy serves as an exemplary system for investigating the effect of changing ecological pressures on the evolution of novel developmental phenotypes. The sea urchin genus Heliocidaris represents one of the best studied examples of this switch, in which H. erythrogramma evolved lecithotrophy around five million years ago. Over the past several decades, previous work has documented phenotypes distinguishing development of this species from the ancestral, planktotrophic condition. These phenotypes range from increased sperm size and hypertrophy of lipid deposition in the egg, to changes in embryonic axis determination, delayed blastomere specification, and alterations to spatial and temporal expression of key developmental network genes. Although much is known about what phenotypes are associated with the evolution of lecithotrophy in this species, much less is known of the regulatory mechanisms for how these changes arose in the first place. This gap in knowledge is the subject of my thesis: to gain a better understanding of the genomic and molecular basis for the evolution of lecithotrophy in H. erythrogramma. To accomplish this, I carried out a set of physiological and genomic comparisons between H. erythrogramma, a closely-related planktotrophic congener H. tuberculata, and a distantly-related planktotroph Lytechinus variegatus in order to identify specific molecules and genomic loci underlying lecithotrophic development. In Chapter One, I analyzed lipid and protein content of eggs and larvae from these three species using mass spectrometry to characterize metabolic differences in egg provisioning and embryogenesis in H. erythrogramma. In Chapter 2, I present a chromosome-level assembly of L. variegatus, highlighting a genome assembly and annotation method that will be applied to the two Heliocidaris species and the utility of a high-quality genome assembly for functional genomic analysis. In Chapter 3, I compare the genome assemblies of H. erythrogramma and H tuberculata to show that a conserved developmental network controlling sea urchin development has been dramatically modified in H. erythrogramma through genic and non-coding modifications. In Chapter 4, I compare the chromatin landscapes of these three species through development using ATAC-seq to access how cis-regulatory mechanisms have evolved during the acquisition of lecithotrophic development. From this work, I found that the enormous lipid provisioning of H. erythrogramma eggs is composed primarily of diacylglycerol ether lipids and that these lipids are not metabolized for pre-metamorphic development, but instead provisioned to promote post-metamorphic survivorship of juvenile individuals. Instead, upregulated glycolysis proteins suggest this pathway may be driving rapid pre-metamorphic development. Comparative genomic analyses demonstrate positive selection and changes to chromatin accessibility have modified the regulatory genome of H. erythrogramma, especially near developmental network genes, and that these changes are associated with temporal and spatial differences in embryonic gene expression. Furthermore, the Pmar1 transcription factor family has likely lost its ancestral function in specifying the primary mesenchyme lineage in this species, a cell type responsible for larval skeletal development and patterning of the embryo. Finally, development has one of the largest effects on changes in chromatin accessibility in each species, but particularly near developmental genes, embryonic chromatin dynamics is highly associated with the life history strategy of each species. Future work identifying examples of convergent or novel pathways driving evolution of lecithotrophy in other echinoids will provide valuable insight into general principles governing how derived developmental phenotypes can evolve at short evolutionary timescales.