From Crisis to Restoration: Technical Intellectuals and the Politics of Italy's Post-war Development 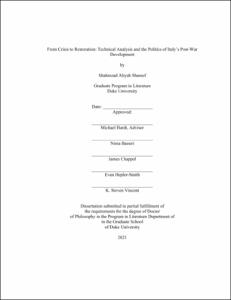 Development has been studied as a project pursued by imperialist nations to strengthen the social and economic order of empire and to curb communism. It was deployed just as frequently, however, in sovereign spaces. This project examines the efforts of the Italian intellectuals who led the Svimez thinktank to organize the economic development of southern Italy in the post-war era. I draw upon materials from Italy’s national archive and those published by Svimez between 1968 and 1988. Whereas imperial development sought to strengthen empire, Italian development sought to strengthen the nation. To understand the intellectual origins of post-war Italian development I turn to events that rocked the nation during the interwar period and appeared to many as a national crisis. That included labor uprisings in response to rising prices beginning in 1919 and the financial crisis of the 1930s. These events oriented technical intellectuals within Milan’s Catholic and socialist milieu to social issues and the wholeness of the nation. After the war, Svimez leaders continued to focus on such questions. They deployed statistical and economic techniques to show southern stagnation was also a crisis that threatened the nation’s integrity.

To address it, they turned to capital. Industrial capital would extend the nation’s economic fabric to the places where it was most irrational and produce the homogeneity believed to be a defining characteristic of a nation. Christian Democracy, experiencing its own electoral crisis, supported the calls for a regional development agency but reframed it as a project of social justice. This language derived from documents they drafted while organizing their party in 1942, which imagined catholic social doctrine as the foundation of the post-fascist state. Italian development became part of the post-fascist project to renew the state’s moral authority and its role as a mediator between capital and labor. I conclude Italian development was response to a national crisis that envisioned a restoration and expansion of the conditions of Italian capitalism.