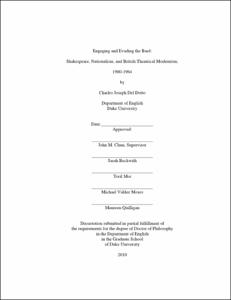 Engaging and Evading the Bard is about British theatrical modernism and its ambivalent relationship to Shakespeare. The conventional narrative of early twentieth-century British theater and drama situates their rise within the broad European context of Continental artistic developments, such as the rise of Henrik Ibsen. Examining the work of George Bernard Shaw, T. S. Eliot, W. H. Auden, and Peter Brook, this dissertation argues that the inauguration of a specifically British theater, theatricality, and dramatic movement in the modernist period is absolutely contingent on a turn to Shakespeare, the icon par excellence of British drama, British culture, British identity, British history, and British power. The turn to Shakespeare enables the emergence of a British tradition formally and politically distinct from its Continental counterparts.

This dissertation argues, however, that a modernist logic of paradox, contradiction, and irony governs the dynamics of British theatrical modernism's turn to Shakespeare: the engagement with Shakespeare is always co-extensive with the evasion of Shakespeare. Engaging and Evading the Bard explores the modernist irony towards Shakespeare. For Shaw, a Fabian-inspired anti-idealist political aesthetic (set forth in The Quintessence of Ibsenism) motivates his condemnation of "Bardolatry" throughout his career, most notably in Caesar and Cleopatra. In stark contrast to Shakespeare, a high-church, conservative Christian religiosity and ideological investment in medieval modernism lie at the heart of Eliot's 1935 verse drama Murder in the Cathedral. The interpenetration of media (print and performance) and genre (poetry, criticism, and drama) in The Sea and the Mirror: A Commentary on The Tempest allegorizes Auden's new-found liminal identity in the 1940s as both a British and American poetic and political subject. Post-war, post-imperial, Cold War geopolitical realities and existential anxieties, especially concerning the Bomb and the threat of nuclear annihilation, lead Brook to adopt the late modernist theatricality of Samuel Beckett in his 1962 Royal Shakespeare Company production of King Lear, a production that succeeds in staging Shakespeare's play as the metatragedy (that is, a tragedy about the failure of tragedy) that it really is.

Ultimately, this dissertation problematizes nationalism as an animating force for British theatrical modernism by positioning nationalism in the modernist period in relation to its ethical and political universalist antinomies: socialist internationalism, transatlantic transnationalism, and an emergent utopian postmodernist postnationalism.