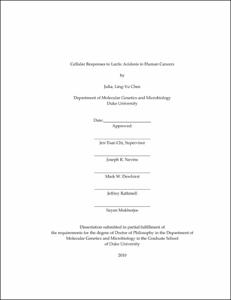 The physiology of the tumor microenvironment is characterized by lower oxygen (hypoxia), higher lactate, extracellular acidosis and glucose starvation. We examined the global, transcriptional cellular responses to each of these microenvironmental stresses in vitro, projected them onto clinical breast cancer patients' samples in vivo, and returned to perform further in vitro experiments to investigate the potential mechanisms involved in these stress responses. The reciprocal exchange of information was critical and advanced our understanding of the potential clinical relevance of cellular responses.

Our expression array result showed that lactic acidosis induces a strong response, distinct from that of hypoxia in human mammalian epithelial cells (HMECs), indicating lactic acidosis is not only a by-product of hypoxia but has a unique role as a stimulant to cells in the tumor microenvironment. Cellular responses to lactosis and acidosis further demonstrated that acidosis was the main driving force in the lactic acidosis response. These responding gene signatures were then statistically projected into clinical breast cancer patients' expression data sets. The hypoxia response, as reported previously, was associated with bad prognosis, where as the lactic acidosis and acidosis responses, were associated with good prognosis. Additionally, the acidosis response could be used to separate breast tumors with high versus low aggressiveness based on its inversed correlation with metastatic character. We further discovered that lactic acidosis, in contrast to hypoxia, abolished Akt signaling. Moreover, it downregulated glycolysis and shifted energy utilization towards aerobic respiration.