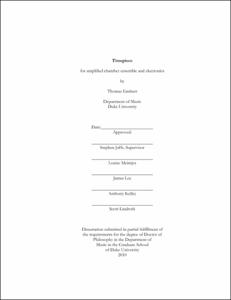 Music reminds us that time is not a static entity of existence. It is a pervasive concept across eras, cultures and disciplines, yet it eludes simple definition. Time as an idea can mean many things.

The overall goal of <italic>Timepiece</italic> is to create a musical whole that addresses various aspects of time as experienced both musically and cognitively; in art and in life. The composition aims to highlight the multiple ways in which we understand and think about time as an abstract concept and as a part of human experience. Each of the four movements considers a specific approach to time while emphasizing the ways in which music is a temporal art.

Movement I, <italic>history becoming memory</italic>, explores time as it relates to change; the movement from past through present to future as represented by the changing states of ending, being and becoming as well as the role of history and memory as informing musical language. Movement II, <italic>circadian cycles</italic> maps an infant's sleep and feeding cycle on to musical parameters. Movement III, <italic>relative and noisy</italic> uses digitally processed sound samples of modeled cosmic events that would cause ripples in the fabric of space-time as the background to which the instrumentalists musically react. The final movement, <italic>second fastest land animal for short distances</italic>, explores ideas of speed and rapidity using elements, both composed and sequenced, of common "breakbeats" found in certain genres of electronic dance music.

As each instrument is amplified, musical temporalities distinguish themselves, highlighted by the distinct sounds produced both acoustically and electronically. Beyond the basic acoustical variance between the sound of the individual instruments locally and their sound projected through speakers, the amplified sound is manipulated through both sound mixing and digital processing. In many ways, as technology has given rise to musical ideas surrounding the complexity of time itself, so it serves to aid in the expression of the temporal multiplicity in this composition.