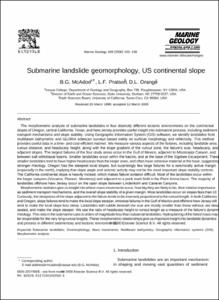 View / Download
2.6 Mb
Date
Authors
McAdoo, BG
Pratson, LF
Orange, DL
Repository Usage Stats
36
views
85
downloads
Abstract
The morphometric analysis of submarine landslides in four distinctly different tectonic environments on the continental slopes of Oregon, central California, Texas, and New Jersey provides useful insight into submarine process, including sediment transport mechanisms and slope stability. Using Geographic Information System (GIS) software, we identify landslides from multibeam bathymetric and GLORIA sidescan surveys based solely on surficial morphology and reflectivity. This method provides useful data in a time- and cost-efficient manner. We measure various aspects of the failures, including landslide area, runout distance, and headscarp height, along with the slope gradient of the runout zone, the failure's scar, headscarp, and adjacent slopes. The largest failures of the four study areas occur in the Gulf of Mexico, adjacent to Mississippi Canyon, and between salt withdrawal basins. Smaller landslides occur within the basins, and at the base of the Sigsbee Escarpment. These smaller landslides tend to have higher headscarps than the larger ones, and often have cohesive material at the base, suggesting a stronger rheology. Oregon has the steepest local slopes, but surprisingly few large failures for a seismically active margin (especially in the north), implying that slope angle and seismic activity may not be the most important slope stability controls. The California continental slope is heavily incised, which makes failure isolation difficult. Most of the landslides occur within the larger canyons (Vizcaino, Pioneer, Monterey) and adjacent to a pock mark field in the Point Arena basin. The majority of landslides offshore New Jersey occur on the open slope between Lindenkohl and Carteret Canyons. Morphometric statistics give us insight into where mass movements occur, how big they are likely to be, their relative importance as sediment transport mechanisms, and the overall slope stability of a given margin. Most landslides occur on slopes less than 10°. Curiously, the steepness of the slope adjacent to the failure tends to be inversely proportional to the runout length. In both California and Oregon, slope failures tend to make the local slope steeper, whereas failures in the Gulf of Mexico and offshore New Jersey will tend to make the local slope less steep. Landslides with rubble beneath the scar are mostly smaller than those without, are deep seated, and make the slope steeper. We use the ratio of headscarp height to runout length as a measure of the failure's dynamic rheology. This ratio in the submarine case is orders of magnitude less than subaerial landslides. Hydroplaning of the failed mass may be responsible for the very long runout lengths. These morphometric relationships give us important insight into landslide dynamics and process in different sedimentary and tectonic environments. (C) 2000 Elsevier Science B.V.
Type
Journal article
Subject
Science & Technology
Physical Sciences
Geosciences, Multidisciplinary
Oceanography
Geology
submarine landslides
geomorphology
mass movements
multibeam bathymetry
Geographic Information Systems (GIS)
morphometric analysis
CASCADIA SUBDUCTION ZONE
EARTHQUAKES
CANYONS
FLOWS
Permalink
https://hdl.handle.net/10161/23918
Published Version (Please cite this version)
10.1016/S0025-3227(00)00050-5
Publication Info
McAdoo, BG; Pratson, LF; & Orange, DL (2000). Submarine landslide geomorphology, US continental slope. Marine Geology, 169(1-2). pp. 103-136. 10.1016/S0025-3227(00)00050-5. Retrieved from https://hdl.handle.net/10161/23918.
This is constructed from limited available data and may be imprecise. To cite this article, please review & use the official citation provided by the journal.
Collections
More Info
Show full item record Associate Professor of Earth and Ocean Sciences
Brian G. McAdoo is Associate Professor of Earth and Climate Science at Duke University’s Nicholas School of the Environment where he studies the effects of disasters triggered by natural hazards. How are humans impacting the physical systems that keep us alive, and how are marginalized populations specifically affected?  Current research projects in Nepal (earthquakes, landslides and road development) as well as Borneo and Brazil (deforestation, ecosystem services and community hea Gendell Family Professor of Energy and Environment
Lincoln Pratson is a professor in the Nicholas School of the Environment's Division of Earth & Ocean Sciences. He has been Chair of EOS, Director of the Duke University Energy Hub, Associate Director of the Gendell Center for Engineering, Energy & the Environment at Duke, served on the Executive Committee for the Research Triangle Energy Consortium (https://www.rtec-rtp.org/), and was a co-founder & co-director of the Sustainable Energy Fellowship (http://www.teachenergy.org/). Prats
Alphabetical list of authors with Scholars@Duke profiles.