The Racist Anti-Racism of American Anthropology 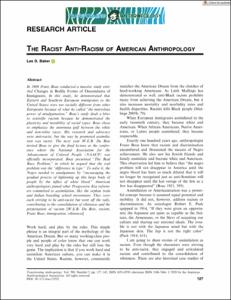 View / Download
443.8 Kb
Date
Author
Baker, LD
Repository Usage Stats
22
views
139
downloads
Abstract
In 1909 Franz Boas conducted a massive study entitled Changes in Bodily Forms of Descendants of Immigrants. In this study, he demonstrated that Eastern and Southern European immigrants to the United States were not racially different from other Europeans because of what he called “the marvelous power of amalgamation.” Boas’s study dealt a blow to scientific racism because he demonstrated the plasticity and instability of racial types. Boas chose to emphasize the enormous gulf between the white and non-white races. His research and advocacy were anti-racist, but the way he promoted assimilation was racist. The next year W.E.B. Du Bois invited Boas to give the final lecture at the conference where the National Association for the Advancement of Colored People (NAACP) was officially incorporated. Boas presented “The Real Race Problem,” in which he argued that the real problem was the “difference in type.” To solve it, the Negro needed to amalgamate by “encouraging the gradual process of lightening up this large body of people by the influx of white blood.” American anthropologists joined other Progressive Era reformers committed to assimilation, like the orphan train and Indian boarding school movements. They were each striving to be anti-racist but went off the rails, contributing to the consolidation of whiteness and the perpetuation of racism.
Type
Journal article
Permalink
https://hdl.handle.net/10161/24005
Published Version (Please cite this version)
10.1111/traa.12222
Publication Info
Baker, LD (2021). The Racist Anti-Racism of American Anthropology. Transforming Anthropology, 29(2). pp. 127-142. 10.1111/traa.12222. Retrieved from https://hdl.handle.net/10161/24005.
This is constructed from limited available data and may be imprecise. To cite this article, please review & use the official citation provided by the journal.
Collections
More Info
Show full item record