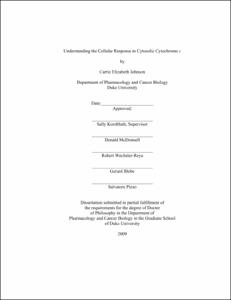 First, we demonstrate that cytosolic cytochrome c kills brain tumor cells but not normal brain tissue. This differential sensitivity to cytochrome c is attributed to high Apaf-1 levels in brain tumors compared with negligible Apaf-1 in brain tissue. These differences in Apaf-1 abundance correlate with differences in E2F1, a previously identified activator of Apaf-1 transcription. Chromatin immunoprecipitation assays reveal that E2F1 binds the Apaf-1 promoter specifically in tumor tissue, suggesting that E2F1 contributes to Apaf-1 expression in brain tumors. These results demonstrate an unexpected sensitivity of brain tumors to cytochrome c and raise the possibility that this phenomenon could be exploited therapeutically to selectively kill brain cancers.

Secondly, we develop a method for monitoring caspase activity in Xenopus laevis oocytes and early embryos. The approach, utilizing microinjection of a near-infrared dye that emits fluorescence only after its cleavage by active caspases, has enabled the elucidation of subtleties in the apoptotic program. We demonstrate that brief caspase activation is sufficient to cause death. We illustrate the presence of a cytochrome c dose threshold, which is lowered by neutralization of inhibitor of apoptosis proteins. We show that meiotic oocytes develop resistance to cytochrome c, and that eventual death of these oocytes is caspase-independent. Imaging caspase activity in the embryo suggests that apoptosis in early development is not cell-autonomous. Finally, we believe this method presents a useful screening modality for identifying novel apoptotic regulators as well as pro-apoptotic small-molecules that could be useful in treating brain tumors.