Political Competition and the Regulation of Foreign Direct Investment 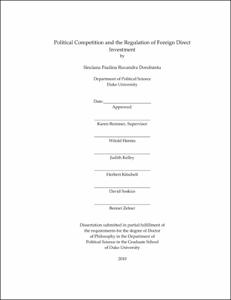 This dissertation examines the variation in the choice of FDI regulations. Why do some countries restrict the entry and operations of foreign MNEs while others permit and even seek inward FDI? What factors determine the choice of FDI regulations and what conditions are likely to bring about their reform? This study identifies the political dynamics leading to the improvement or deterioration of investment climates in transition economies and beyond.

I argue that FDI policies depend on the level of political competition and the anticipated distributional implications of FDI liberalization for the main constituencies that back the government in office. Democratic governments, which derive political power from domestic workers who benefit from investments by foreign firms, liberalize FDI regulations. By contrast, non-democratic leaders, who fear that FDI would upset the balance of domestic economic power and undermine the privileged position of domestic industrialists who support the regime, continue to restrict foreign investment.

I examine the choice of FDI regulations using a newly constructed database of FDI regulations in 28 transition economies between 1989 and 2008, an index of investment freedom available for a worldwide sample starting in 1994, and changes over time in three complementary case studies. The statistical analysis reveals that higher levels of political competition are associated with greater openness to FDI and the case study research shows that both increases and decreases in the level of political competition lead to the revision of the FDI legislation. While democratization has brought about more liberal FDI policies, the consolidation of authoritarian regimes has been followed by stricter FDI regulations.