The Mechanism of Mitotic Recombination in Yeast 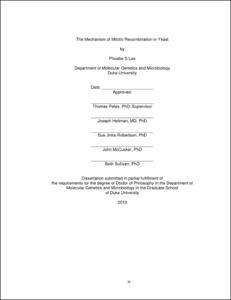 A mitotically dividing cell regularly experiences DNA damage including double-stranded DNA breaks (DSBs). Homologous mitotic recombination is an important mechanism for the repair of DSBs, but inappropriate repair of DNA breaks can lead to genome instability. Despite more than 70 years of research, the mechanism of mitotic recombination is still not understood. By genetic and physical studies in the yeast Saccharomyces cerevisiae, I investigated the mechanism of reciprocal mitotic crossovers. Since spontaneous mitotic recombination events are very infrequent, I used a diploid strain that allowed for selection of cells that had the recombinant chromosomes expected for a reciprocal crossover (RCO). The diploid was also heterozygous for many single-nucleotide polymorphisms, allowing the accurate mapping of the recombination events.

I mapped spontaneous crossovers to a resolution of about 4 kb in a 120 kb region of chromosome V. This analysis is the first large-scale mapping of mitotic events performed in any organism. One region of elevated recombination was detected (a "hotspot") and the region near the centromere of chromosome V had low levels of recombination ("coldspot"). This analysis also demonstrated the crossovers were often associated with the non-reciprocal transfer of information between homologous chromosomes; such events are termed "gene conversions" and have been characterized in detail in the products of meiotic recombination. The amount of DNA transferred during mitotic gene conversion events was much greater than that observed for meiotic conversions, 12 kb and 2 kb, respectively. In addition, about 40% of the conversion events had patterns of marker segregation that are most simply explained as reflecting the repair of a chromosome that was broken in G1 of the cell cycle.

To confirm this unexpected conclusion, I examined the crossovers and gene conversion events induced by gamma irradiation in G1- and G2-arrested diploid yeast cells. The gene conversion patterns of G1-irradiated cells (but not G2-irradiated cells) mimic the conversion events associated with spontaneous reciprocal crossovers (RCOs), confirming my hypothesis that many spontaneous crossovers are initiated by a DSB on an unreplicated chromosome. In conclusion, my results have resulted in a new understanding of the properties of mitotic recombination within the context of cell cycle.