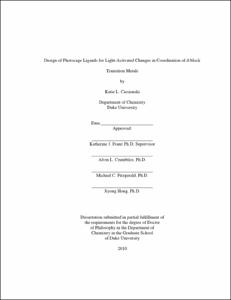 The concept of light-activated "caged" metal ions was first introduced for Ca2+. These high affinity coordination complexes are activated by UV light to release calcium ions intracellularly and have found widespread use in understanding the many roles of calcium in biological processes. There is an unmet need for photocaging ligands for biologically relevant transition metal ions. Described here are the first examples of uncaging biologically important d-block metal ions using photoactive ligands.

New nitrogen-donor ligands that contain a photoactive nitrophenyl group within the backbone have been prepared and evaluated for their metal binding affinity. Exposure of buffered aqueous solutions of apo-cage or metal-bound cage to UV light induces cleavage of the ligand backbone reducing the denticity of the ligands. Characterization of several caging compounds reveals that quantum efficiency and metal binding affinity can be tuned by modifications to the parent structure. The change in reactivity of caged vs. uncaged metal for promoting hydroxyl radical formation was demonstrated using the in vitro deoxyribose assay. The function of several of these compounds in vivo pre- and post-photolysis has been validated using MCF-7 cells. This strategy of caging transition metals ions is promising for applications where light can trigger the release of metal ions intracellularly to study metal trafficking and distribution, as well as, selectively impose oxidative stress and/or metal toxicity on malignant cells causing their demise.